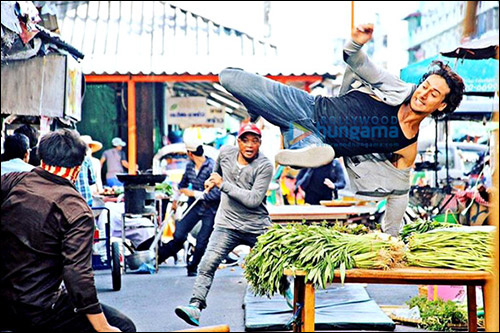 When Tiger Shroff made his debut with Heropanti, he was appreciated for the film, courtesy his smooth dance moves and the high octane stunts. Considering his next film is all about rebellion, we would once again see the action packed avatar of Tiger Shroff in Baaghi.

Here's a glimpse of one of the action sequences that the actor shot amidst a crowded market area. The upcoming romantic drama has Tiger paired opposite his schoolmate Shraddha Kapoor for the first time and a glimpse of their sizzling chemistry was recently revealed with an intense liplock scene. The film also promises to be a potboiler filled with songs and dance and the trailer of Baaghi is all set to release today.

Directed by Sabbir Khan and produced by Sajid Nadiadwala in association with UTV, Baaghi is slated to release on April 29.