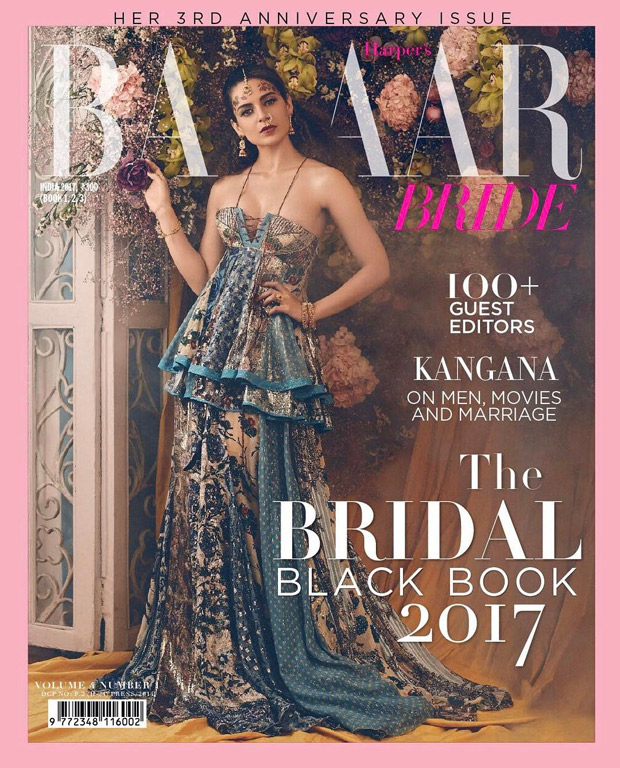 The one thing Kangna Ranaut certainly knows is how to steal the limelight. The actress is giving vintage vibes on the special issue of Harper’s Bazaar Bride magazine cover. Apart from Kangna Ranaut, Shahid Kapoor, Jacqueline Fernandez and Harshvardhan Kapoor are also featured on special edition covers as they are celebrating their third anniversary.

Striking a pose in front of a floral backdrop, Kangna looks classic and elegant wearing Roberto Cavalli designed top and skirt. The print work along with patchwork gives her royal look a modern twist. As the outfit is full of prints, she has given old school vibes with intricate gold jewellery such as a maang tikka, earrings, bangles, rings and traditional nose ring by P.N. Gadgil Jewellers. Dark matte lips along with golden eye makeup and half tied hair with centre parting rounded her cover look.

On the work front, Kangna Ranaut is gearing up for the release of Rangoon which is helmed by Vishal Bhardwaj. She will be seen as Julia, a leading actress who travels, performs and entertains soldiers of the Indian British Army. The film features Shahid Kapoor and Saif Ali Khan and is slated for release on February 24.