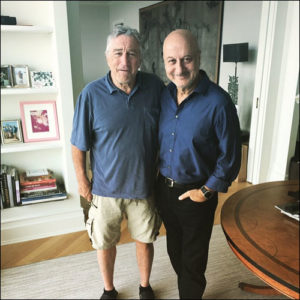 We know that Anupam Kher is one of the most celebrated actors in India. The actor has not only made tons of films in India but has also been an international star for a while now. So, it did not come as a surprise when the actor was invited for a lunch by the Hollywood star Robert DeNiro in New York City yesterday.

Robert DeNiro is one of the finest talents in Hollywood who has starred in several films and is an Academy award winner as well. Anupam Kher posted a picture on his twitter account with the caption, "Life is beautiful & blessed when world's Best Actor Robert De Niro invites you 4 lunch at his home in NY. Jai Ho.:)"

Anupam Kher who is in NYC on a trip attended the Woody Allen concert too and expressed how excited he was to watch him perform live. He also shared a video of from the venue. "Excited and looking forward to The Woody Allen concert.:) #CinemaGenius #NewYork #TheCarlylHotel," he tweeted.

Here is Woody Allen Live for you all from New York. Enjoy.:) #Genius #GreatWriterDirector #TheCarlyleHotel