Last Updated 21.09.2021 | 8:57 PM IST
feedback language
follow us on
Bollywood Hungama » News » Bollywood Features News » Cannes 2019: Amul gives its take on Deepika Padukone and Aishwarya Rai Bachchan walking the red carpet in a gown, albeit in its own STYLE!

For the past one week, the entertainment media is buzzing with the varied outfits that stars have been sporting at the prestigious red carpet of Cannes 2019. The Film festival that also celebrates fashion alike has many celebrities sashaying down the carpet representing prestigious brands across the world and amongst them was Deepika Padukone and Aishwarya Rai Bachchan who represented L’Oreal Paris. In a recent take on the Cannes Film Festival, Amul decided to pay a tribute to the two divas by creating these caricatures that featured them in one of their most popular outfits during the fest! 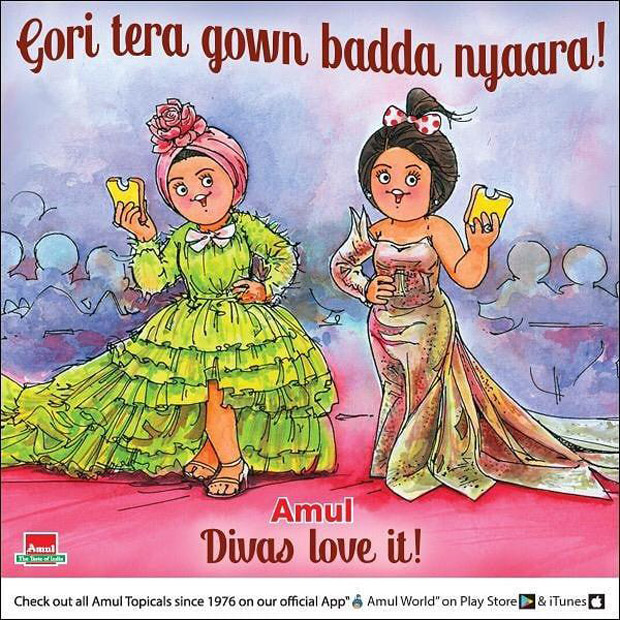 Deepika Padukone, who made many fashion statements this year at Cannes 2019, grabbed eyeballs for experimenting with her looks whilst walking the red carpet. On Day 2 of the actress’ red carpet appearance at the film festival, she chose Giambattista Valli lime green ruffled gown and paired it up with a contrasting pink hair bowband. The appearance grabbed eyeballs for its experimentative nature and also resulted in many memes.

Speaking of Amul, the brand always comes up with quirky topical posters and yet again they have nailed it with the Cannes looks!

Besides these two actresses, many other stars like Priyanka Chopra, Kangana Ranaut, Sonam Kapoor, Huma Qureshi, Diana Penty, Hina Khan, Mallika Sherawat too walked the red carpet of the festival.