Its summer time, folks and the annual soiree that celebrates cinema, fashion and creativity is here – Cannes International Film Festival. This year again, for the 17th time in a row, Aishwarya Rai Bachchan will make us prouder than ever and grace the prestigious red carpet as the brand ambassador of the cosmetic giant, L’Oreal. Over the years now, Aishwarya has doled out a melange of styles with the global fashion pundits keeping a hawk’s watch on her rendition of Indian and international designers, giving out their verdicts. From being called the most beautiful woman on the earth to a global icon, Aishwarya’s tryst with fashion on the red carpet that’s renowned for establishing identities and courting recognition, chronicles a fashionable journey of 16 years, beginning from 2002 to 2016. Taking it all in her stride and walking with that signature nonchalance and enviable élan, Aishwarya Rai Bachchan’s red carpet journey have always had something unusual in store with a few hits and misses.

As the diva is all set to make her 17th stint at the 71st Cannes International Film Festival 2018 yet again, here’s a recap of how Aishwarya Rai Bachchan has traversed her style journey of the Cannes Film Festival. 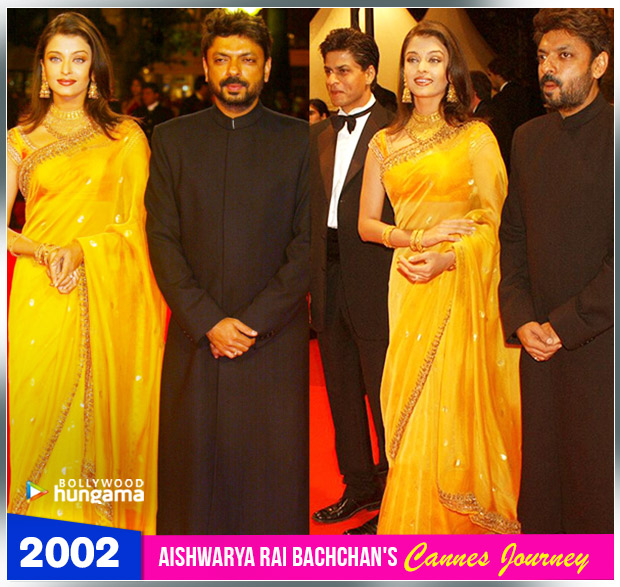 Aishwarya made a dreamy debut at Cannes and chose to go desi with a golden Neeta Lulla sari for the premiere of her film Devdas teaming it heavy gold jewellery. While her style sensibility to go traditional was applauded, some reasoned that the jewellery was a bit of an OTT, nonetheless, she looked elegant. 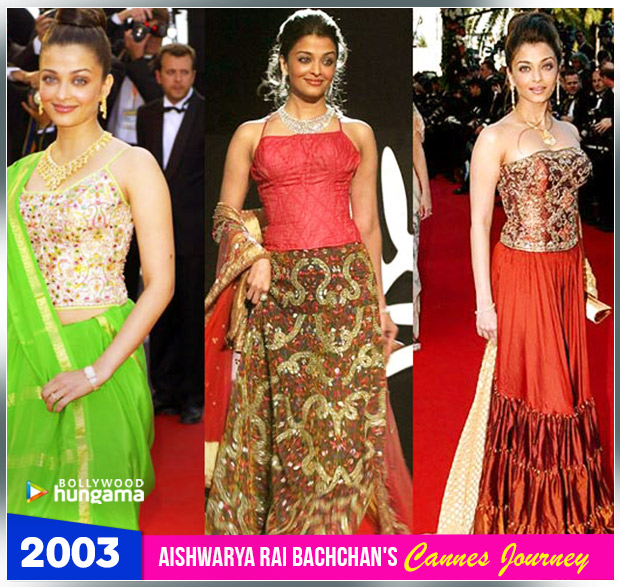 This year saw her mark her stint as a jury member. While she retained her traditional style sensibilities with neon green Neeta Lulla saree and a tight top knot, garnering flak for the same. Her garish style charade continued with a brown-red lehenga, shimmery pink dress and a messy hairdo. 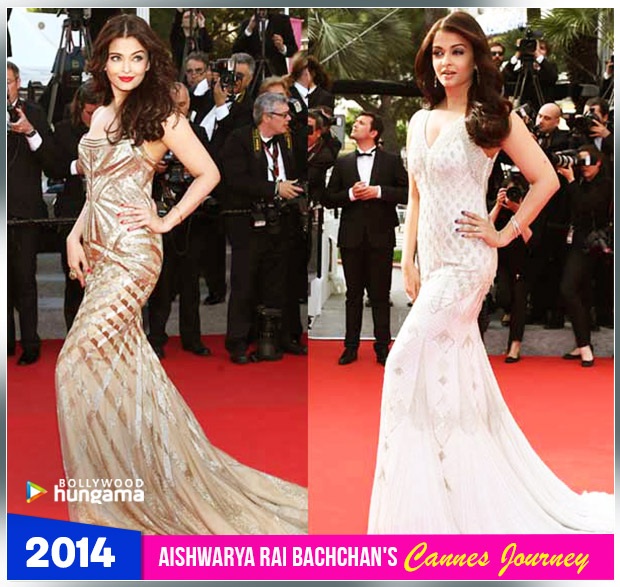 This year saw Aishwarya explore her sensuality with a revealing gown from her favourite designer, Neeta Lulla, a silver sequined gown with cut-outs and a bare back, accessorised jewellery from Chopard.  She garnered flak for this owing to the unflattering cut-out and the unnecessary scarf. This year also saw her inaugurate the Indian Pavilion at the Cannes Film Festival wearing a white and golden Kanjeevaram saree. 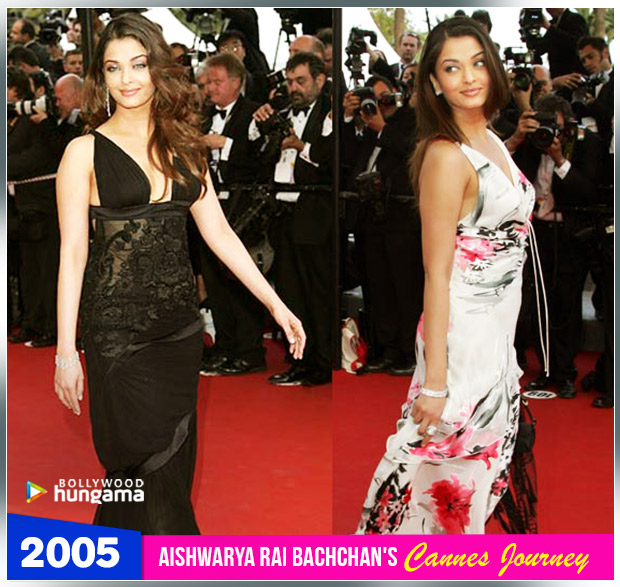 This year saw Aishwarya open the film festival, an honour courted by first Indian ever. She brought with her two stunning ensembles - a floral printed Giorgio Armani dress and a black Gucci gown with an aesthetic plunge and a short train. 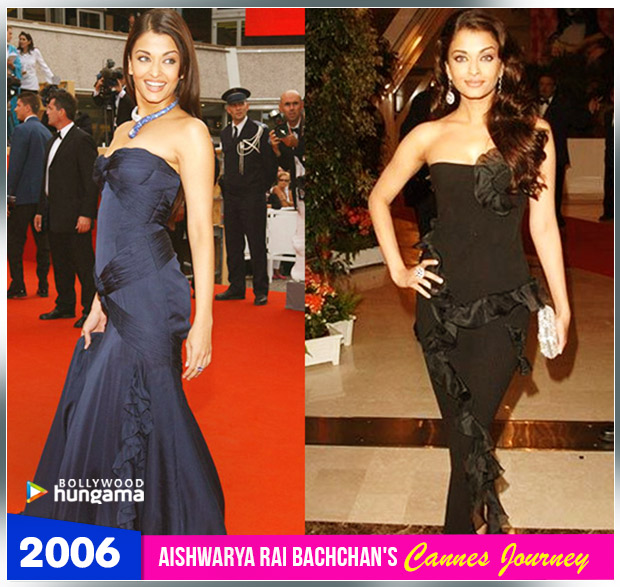 Aishwarya chose two classy ensembles - navy blue Roberto Cavalli strapless gown accessorized with a snake-like neck-piece and a black ruffled lace gown. This was the same year her movie Provoked was screened at the film festival. 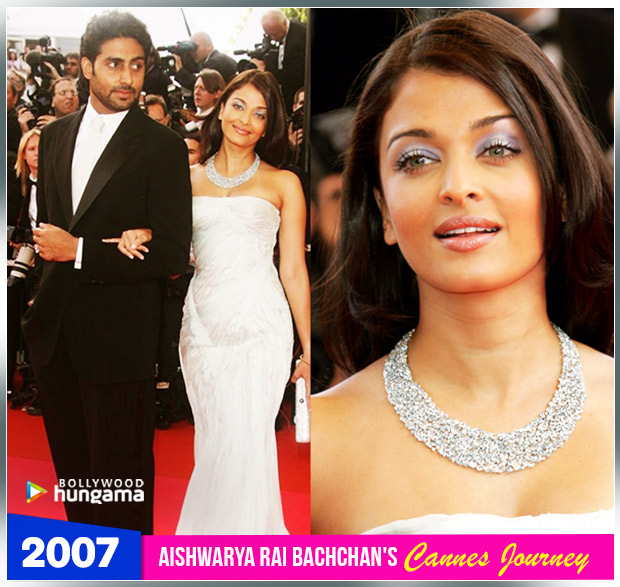 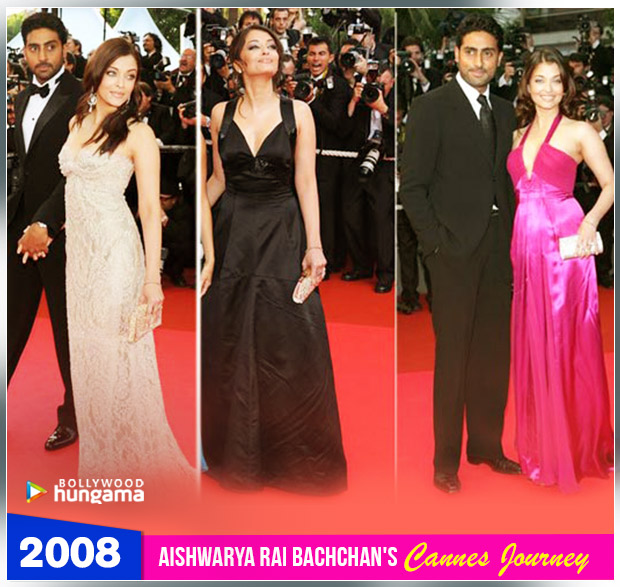 This year saw her dole out three stunning styles that featured the golden Armani, a black and also a bright Cavalli fuchsia gown. She was flanked by her family, hubby Abhishek and in-laws Amitabh Bachchan and Jaya Bachchan. 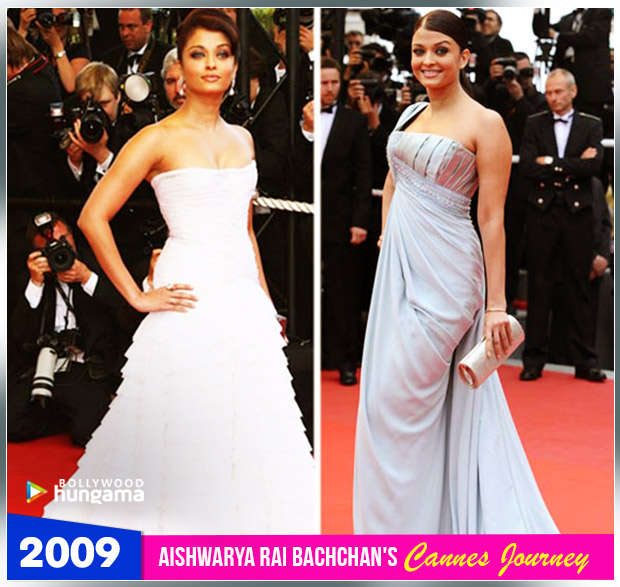 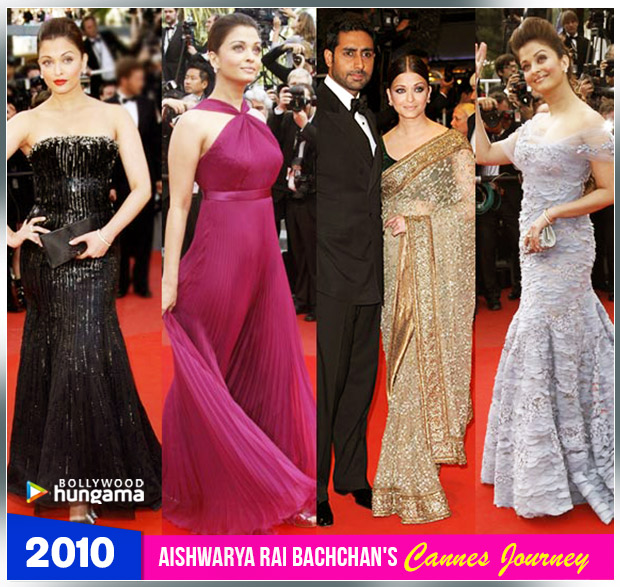 Aishwarya and Abhishek attended the premiere at Cannes with Aishwarya flaunting a gold Sabyasachi saree, an updo and an emerald green blouse. The other two looks featured a beaded strapless Armani Prive gown, a pink pleated Gucci gown with a butterfly neck and a cinched waist. 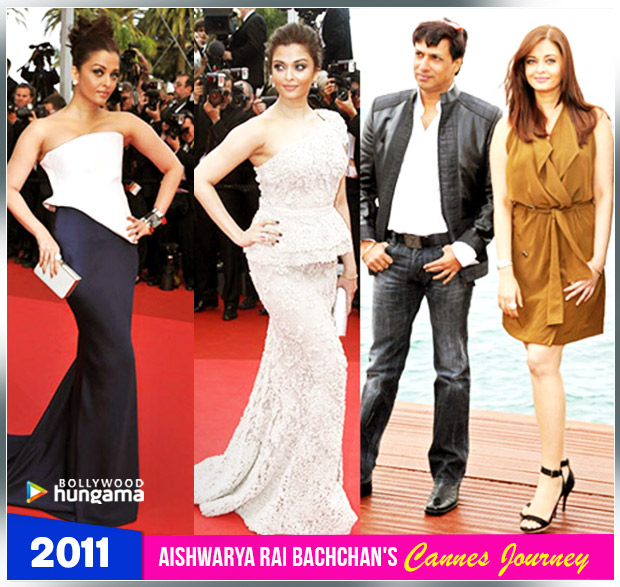 This year, the diva spun two perfect looks, one featuring an Elie Saab one shoulder embroidered gown and other, a geometric Armani Prive dress. She was also announced to feature in Madhur Bhandarkar’s Heroine at that point and wore a brown short dress for the same. 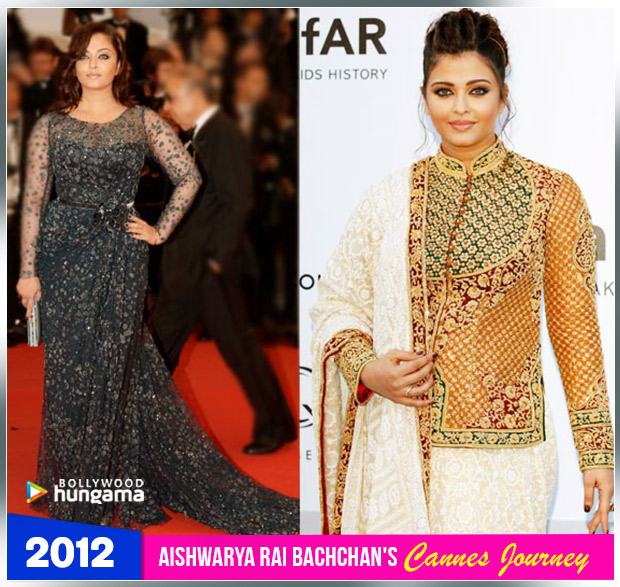 Following the birth of her daughter Aaradhya Bachchan, Aishwarya wore an Elie Saab embellished midnight blue gown with a defined waist. She went down the desi way with a white embroidered Abu-Jani and Sandeep Khosla saree with an elaborate jacket blouse. She garnered praise for flaunting those post-maternity curves without a flinch. 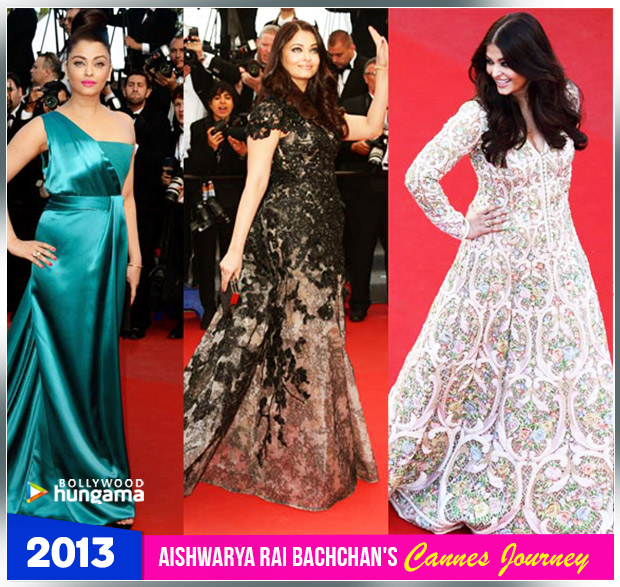 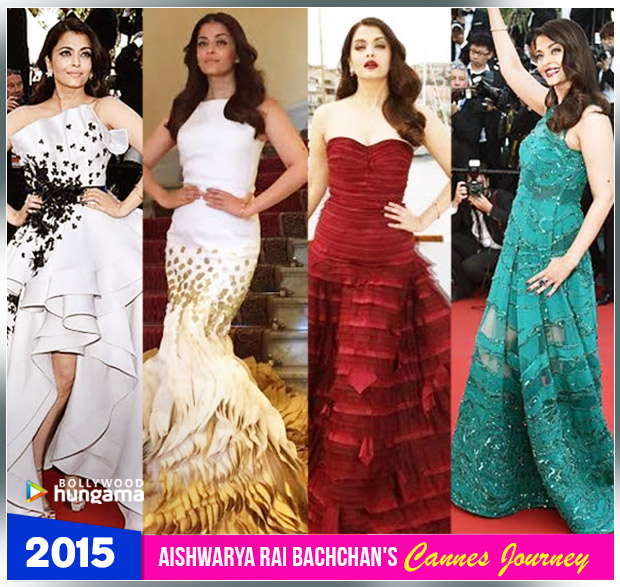 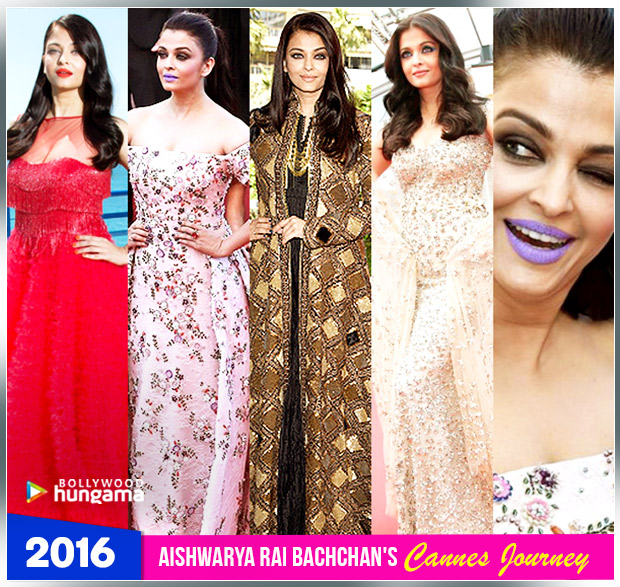 This year saw her grab all eyeballs with the viral purple lips! Aishwarya flaunted a gold embellished Ali Younes gown, a fringe and tulle Naeem Khan to celebrate her 15th year at Cannes and a blush pink embellished Elli Saab gown. For the promotion of Sarbjit, she wore a Rohit Bal embellished jacket and for the premiere of the movie, she wore a floral embroidered Rami Kadi Couture gown and sported purple pink lips with it. 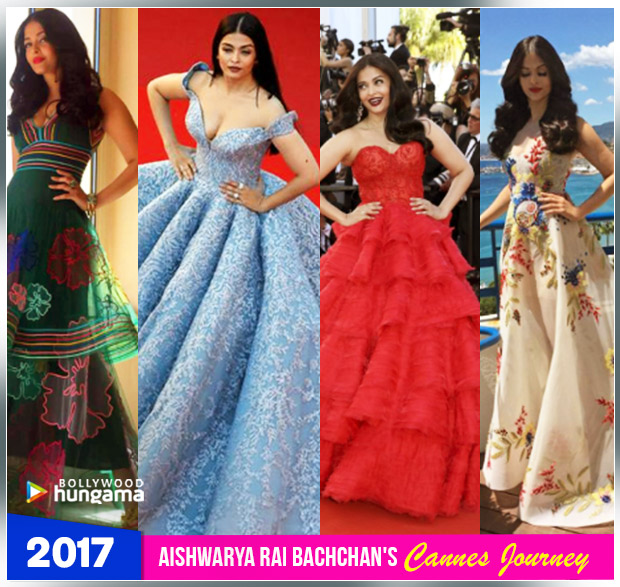 Aishwarya Rai Bachchan may have trodden on tricky fashion grounds with her unconventional choices, but her unmissable aplomb is what strikes a chord! With her big Instagram, debut this year, we are eagerly anticipating what’s in store this year with her Cannes shenanigans.