Last Updated 02.12.2022 | 11:35 PM IST
feedback language
follow us on
Bollywood Hungama » Movies » Movie Reviews » Fanney Khan Movie Review: Though laced with an illogical plot and a lot of loose ends the emotional and funny moments coupled with fine performances ensure that Fanney Khan turns out to be a decent, entertaining fare.

Fanney Khan Movie Review: Though laced with an illogical plot and a lot of loose ends the emotional and funny moments coupled with fine performances ensure that Fanney Khan turns out to be a decent, entertaining fare.

It’s often said that not just talent, but luck is also required to fulfil your dreams of making it big in showbiz. As a result, those with oodles of talent but little luck find it tough to survive in this field. But many of these individuals don’t stop dreaming with the hope that one day luck will favour them. Atul Manjrekar’s directorial debut FANNEY KHAN talks about these relatable aspects and promises some touching as well as hilarious moments. So does FANNEY KHAN succeed in giving the audiences a great time? Or does it fail? Let’s analyse. 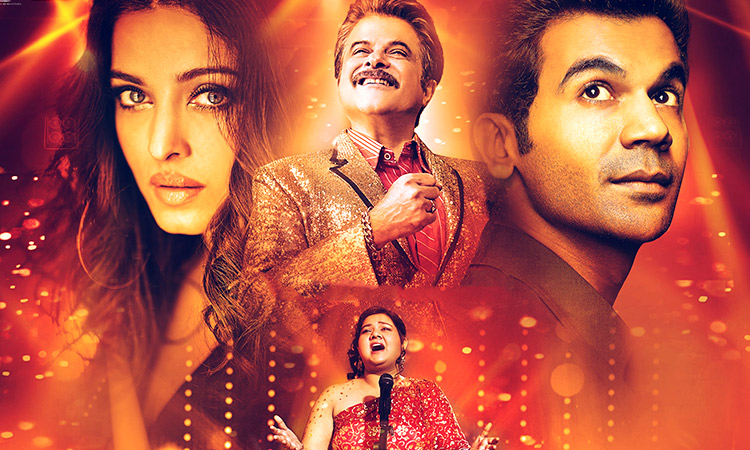 FANNEY KHAN is the story of a father going to desperate lengths to ensure his daughter becomes a star. Prashant Sharma aka Fanney Khan (Anil Kapoor) was a local orchestra singer in Mumbai who has to give up his singing dreams when his daughter Lata (Pihu Sand) is born. Lata is now approaching her 20s and Fanney is now working in a factory. Lata is a huge fan of sensational singer Baby Singh (Aishwarya Rai Bachchan) and aspires to be like her. But her attempts to participate in singing competitions lead to humiliation, more so because of her weight. Fanney wants to save money and cut an album for her. However, his earnings are quite meagre. And one day his world comes crashing down after the factory he works in suddenly closes down. Fanney thankfully starts working as a taxi driver. One day he gets none other than Baby Singh as his passenger. Instead of dropping her at her location, he puts her to sleep by lacing her water with sleeping pills. He then takes her to the factory where he worked, which is now abandoned. With the help of his colleague Adhir (Rajkummar Rao), he officially kidnaps her and also calls Baby's manager Kakkad (Girish Kulkarni) and informs him about the abduction. However, he doesn’t ask for money as ransom. What happens next forms the rest of the film.

FANNEY KHAN is an official remake of the Belgian film IEDEREEN BEROEMD aka EVERYBODY’S FAMOUS [2000]. While the original film was shorter and had dark comedy, thereby maximizing impact, FANNEY KHAN on the other hand moves at its own pace and is too melodramatic. While this may work for some, others might find it unconvincing. Atul Manjrekar, Hussain Dalal and Abbas Dalal’s screenplay is lackluster at places but scores at a few places. Hussain Dalal, Abbas Dalal, Jasmeet K Reen and Athar Nawaz’s dialogues are simple but quite funny in some scenes.

Atul Manjrekar’s direction could have been better and that in turn would have made the film better. There’s no doubt that he handled some scenes exceptionally well. However, at many places, he loses the plot. The storyline is quite illogical in the first place and it needed an expert hand to ensure the film works logically. Unfortunately, Atul partly fails in his endeavour.

FANNEY KHAN has a decent commencement and sets the mood of the film. The introduction of characters however is not that impressive. The track of Adhir and Jinal (Swati Semwal) however is interesting. The film picks up thankfully once the kidnapping takes place. The manner in which Fanney Khan and Adhir make futile attempts to scare Baby Singh makes for a great watch. In the second half, the film drops again and hooks viewers only towards the end. The climax would be loved by a section of viewers as its quite moving. But some might find it too illogical.

The performances however are too good, thereby helping the film. Anil Kapoor is in a great form and is the soul of the movie. The emotional scenes work thanks to him. One can feel his pain and one can’t help but hoot for him even when one knows that what he did isn’t right. Rajkummar Rao genuinely puts his best foot forward and is endearing. He raises laughs in the kidnapping scene. Aishwarya Rai Bachchan looks like a million bucks and adds a lot to the film with her supporting role. Pihu Sand seems a bit irritating at places but she makes up for it with her touching performance in the climax. Divya Dutta (Kavita) is dependable as always. Girish Kulkarni as usual plays the negative part quite well. Satish Kaushik (Kadar bhai) has an interesting part but is wasted. Barbie Rajput (Rhea), Swati Semwal and Asif Basra are decent.

The songs are appropriate for the sequences in which they appear but could have better since the film is essentially a musical. ‘Achche Din’ is the best of the lot. ‘Tere Jaisa Tu Hai’ comes next and it comes at a crucial juncture. ‘Mohabbat’ serves as a fair introduction for Aishwarya. ‘Fu Bai Fu’ has interesting lyrics. ‘Halka Halka’ is the most unconvincing portion of the film as it shows a prominent singer, whose kidnapping has shaken the entire nation, roaming around freely! Tubby - Parik’s background score goes well with the various moods of the film.

S Tirru’s cinematography is quite effective. Ajay Vipin’s production design however is nothing great although it works in the house scenes of Fanney Khan. Monisha R Baldawa’s editing is passable. Eka Lakhani and Manish Malhotra’s costumes are appealing, especially the ones worn by Aishwarya.

On the whole, FANNEY KHAN is laced with illogical plot and a lot of loose ends. But the emotional and funny moments coupled with some fine performances ensure that the film turns out to be a decent, entertaining fare.