South Korean group BTS wrapped up their four shows (November 27, 28, and December 1, 2) of BTS PERMISSION TO DANCE ON STAGE - LA tour. The LA tour marks the act’s first offline concert in two years since the 2019 BTS WORLD TOUR ‘LOVE YOURSELF: SPEAK YOURSELF [THE FINAL] held in Seoul in October 2019. The total number of audience including concertgoers at SoFi Stadium, viewers who watched the online live streaming of the last show (Dec 2), as well as fans who viewed the real-time live screening event at a nearby venue in LA (‘LIVE PLAY in LA’) summed to approximately 813,000. BTS PERMISSION TO DANCE ON STAGE - LA opened with a powerful performance of “ON.” The septet then went on to perform 24 of some of their greatest hits including “Burning Up (FIRE),” “DOPE,” “DNA,” “Black Swan,” “Blood Sweat & Tears,” “Life Goes On,” “Dynamite,” “IDOL,” “Butter,” and “Permission to Dance.” Setlist variations between the different show dates were also made with “We are Bulletproof : the Eternal,” “I’m Fine,” “HOME,” and “Mikrokosmos” added into certain days.

Notably, the tour in LA consisted entirely of all-seven-member stages without any solo performances and deliberately selected fan-favorite songs to celebrate the band’s long-awaited return to an offline concert stage. The shows ended with BTS’ most recent release “Permission to Dance” delivering the message that no permission is needed to dance to your heart’s content. The ARMY BOMB, BTS’ official lightstick, connected fans all around the world with the band.

‘BTS PERMISSION TO DANCE ON STAGE - LA’ was full of surprises, offering various fun and interactive elements for the audience to enjoy throughout all four nights. Megan Thee Stallion appeared as a special guest at the second show (Nov 28) to perform the remix version of “Butter” with BTS while Coldplay's Chris Martin who collaborated with BTS on the chart-topping “My Universe” also made a surprise appearance on the last day to join the septet for a performance. 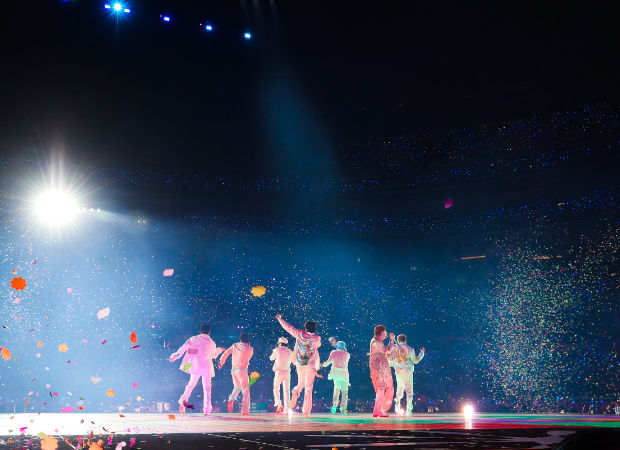 The seven members expressed their sincere feelings and thoughts leading up to their return to offline performances: “While preparing, we worried a lot about whether we’d do well or not.” Expressing their appreciation for their fans the band added, “We can’t express how much it means to us to be able to meet our fans in one place like this.”

“We are excited to host these historic BTS shows at SoFi Stadium, marking their first live shows back in America
since 2019. BTS is the first band to sell out four nights at SoFi Stadium, while simultaneously presenting an
in-person live broadcast event at YouTube Theater,” said Christy Castillo Butcher, SVP of programming and booking
at SoFi Stadium and Hollywood Park. “These shows are bringing fans from all over the world together at Hollywood
Park represents 78 countries while holding the record for most tickets sold by a band or artist at SoFi Stadium.
Events like BTS, establish Hollywood Park as a global destination and world’s stage.” 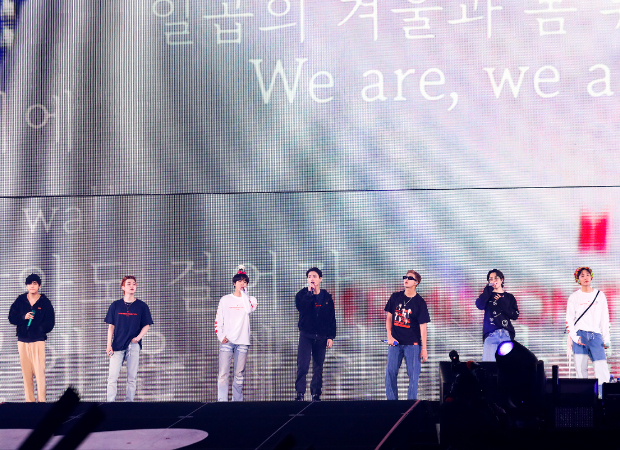 Billboard reported that BTS boasts the biggest Boxscore total by any act in nearly a decade after wrapping up their four-day concerts at SoFi in LA. According to the Boxscore figures reported by Billboard, "BTS’ four Los Angeles-area concerts grossed a mammoth $33.3 million (Rs. 251.32 crore approx) and sold 214,000 tickets. Those totals make the SoFi Stadium shows the highest-grossing engagement since venues began re-opening this year. Further, it’s the largest gross for run of shows at a single venue since 2012, when Roger Waters earned $38 million over nine shows at Estadio River Plate in Buenos Aires, Argentina. Even further, it’s the biggest U.S.-based Boxscore in 18 years, and the second-biggest ever in the 30-year-plus history of Billboard Boxscore in North America (and biggest ever in California), behind Bruce Springsteen’s 10-show marathon at Giants Stadium in East Rutherford, N.J. (38.7 million).

As per the report, this marked BTS becoming the sixth best-grossing engagement in the history of Billboard Boxscore. For unversed, a "Boxscore is generally defined as a report of all shows that an act plays at a single venue during a given tour, or during a leg of a tour. Sums are based on figures reported to Billboard Boxscore and exclude festivals."

At the end of the show, BTS revealed that the next concert would be held in Seoul in March 2022.