The past year has quite literally gone by in a blitz. With the Covid-19 lockdown keeping everyone indoors, offices shut and most importantly theatres shut, the film industry has been through a tumultuous time. In this 3-part series, Bollywood Hungama takes a retrospective look at some of the films since 2001 that have made an impact not only at the box office window but also in theatres. With reference to their crown pulling abilities, here are the Top 10 crowd-pullers from 2001 to 2010 that have clocked the highest footfalls (ticket sales).1 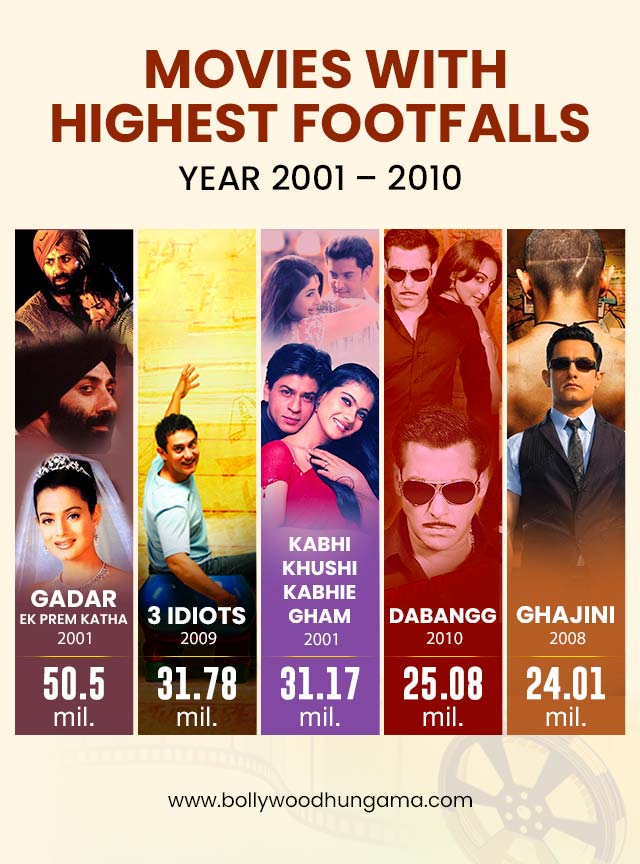 1. Gadar – Ek Prem Katha (2001) - 50.5 million: The Anil Sharma directorial that tells of a love story set in 1947 featured Sunny Deol as Tara Singh a truck driver who falls in love with Amisha Patel's character Sakina, a Muslim girl belonging to an aristocratic family. The film revolved around two individuals, belonging to different religions, who fall in love with each other and the hardships they face before they return to their roots. Release in 2001 the film went on to become one of the most iconic Bollywood films of recent times. Declared an all-time blockbuster Gadar – Ek Prem Katha saw a staggering 50.5 million footfalls with a box office collection of Rs. 76.88 cr.

2. 3 Idiots (2009) - 31.78 million: The Aamir Khan starrer 3 Idiots directed by Rajkumar Hirani might just be one of the most memorable films in the past 20 years. Released in 2009 the film struck a chord with students, parents and those in the education profession making it one of the most watched movies. Also starring Kareena Kapoor Khan, R. Madhavan, Sharman Joshi and Boman Irani the film carried a powerful message about the education system that was welcomed not only by the domestic audience, but overseas as well. With 31.78 million footfalls being recorded over its theatrical run 3 Idiots which ran for over ten weeks raked in a massive Rs. 202.95 cr. at the domestic box office.

4. Dabangg (2010) - 25.08 million: The Salman Khan starrer Dabangg that released in 2010 gave rise to the trend of cop film. A proverbial masala entertainer the film directed by Abhinav Kashyap also featured Sonakshi Sinha, who made her debut with the venture. Released in 2010 Dabangg took forward genre of Bollywood masala entertainer and proved that such films could be paisa vasool entertainer. Witnessing 25.08 million footfalls in 2010 Dabangg raked in Rs. 138.88 cr. at the box office.

5. Ghajini (2008) - 24.01 million: A film which started off the trend of remaking South film was the AR Murugadoss directed Aamir Khan starrer Ghajini. A remake of the 2005 Tamil film by the same name, Ghajini that featured action, drama and revenge fast became an audience favourite, recording 24.01 million footfalls. In fact, the film also became one of the highest grossing Bollywood releases, raking in Rs. 114 cr. Interestingly, Ghajini can be credited as the film which gave rise to the Rs. 100 cr. club that has become a standard measure of a film’s success today. 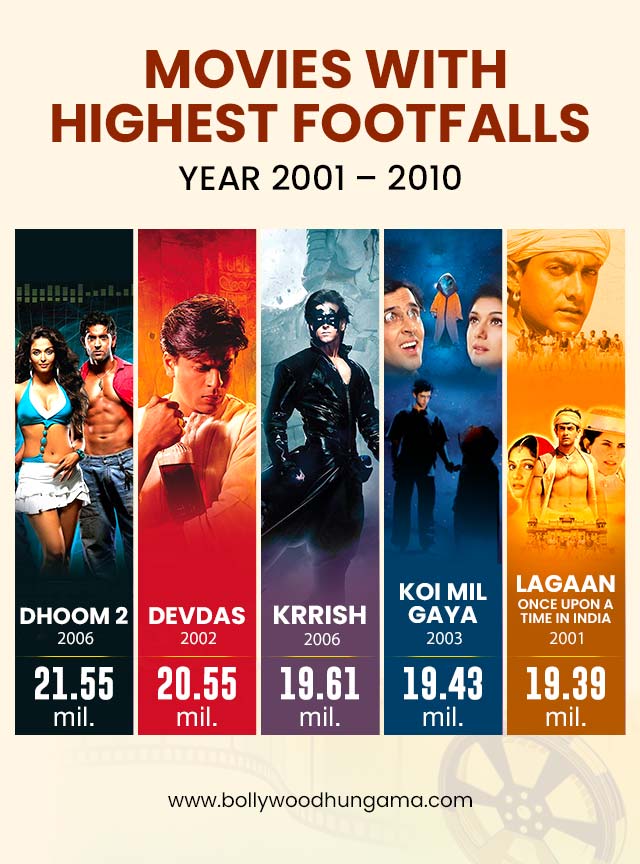 6. Dhoom 2 (2006) - 21.55 million: The second instalment in the Dhoom franchise, Dhoom 2 like its pressor promised high octane action and stunt. Of course the film lived up to the hype collecting Rs. 81.01 cr. during its theatrical run. Starring Abhishek Bachchan, Hrithik Roshan, Aishwarya Rai Bachchan and Uday Chopra the film clocked a massive 21.55 million in footfalls.

7. Devdas (2002) - 20.55 million: The iconic Shah Rukh Khan-Aishwarya Rai-Madhuri Dixit starrer Devdas that released in 2002 is still remembered even today. Directed by none other than Sanjay Leela Bhansali the film managed to collect Rs. 41.66 cr. Though a far cry from today’s Rs. 100 cr. grossers the film has since gone on to become one of the cult classics of Indian cinema. In fact, during its run, Devdas managed to record a staggering 20.55 million footfalls in theatres.

8. Krrish (2006) - 19.61 million: The Hrithik Roshan – Priyanka Chopra starrer Krrish which can easily be termed as India’s first full-fledged super hero film took the audience by storm. Released in 2006 the film raked in Rs. 74.16 cr. at the box office while also recording 19.61 million footfalls in theatres.

10. Lagaan (2001) - 19.39 million: The Aamir Khan starrer Lagaan which is by far one of the lengthiest films, released in 2001. Directed by Ashutosh Gowariker the film is today regarded as one of the best feature films to have released. Clocking 19.39 million footfalls in theatres, Lagaan had managed to collect Rs. 34.31 cr. during its theatrical run.