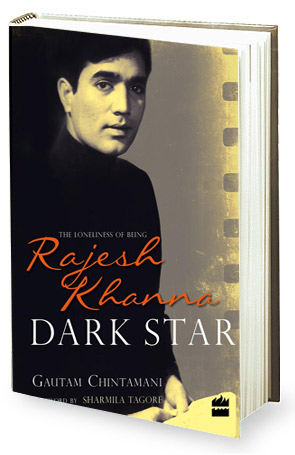 Wow, what a book!

Page after page, chapter after chapter, I was led to exclaim this as first time author Gautam Chintamani took me on a roller coaster ride that spread through 250 odd pages and gave a complete inside account of how Rajesh Khanna saw his rise to being a superstar, managed to face his period of low, never really went out of circulation, saw a good rise all over again, battled his period of low with the emergence of new stars, came up with a few spirited performances as a veteran actor, had a period of uncertainty in between before waving a final good bye.

Now if only a fan boy would have picked up the mantle to tell the story of Rajesh Khanna, it could well have turned out to be an out and out rosy account of the man who continued to make news for four decades in succession. However, what makes this book by Chintamani special is the fact that he maintains an entirely neutral account for the subject in question. In fact going by the book's title (The Loneliness of Being Rajesh Khanna - Dark Star) to the preface he sets, one gets an impression that he could well be attempting to demystify the legend of Rajesh Khanna by presenting him as a man who just got lucky. At places it is more than just hinted as well. However, never once does Chintamani loses balance in his writing, hence presenting Rajesh Khanna more as a human being than just a superstar who had his own bouts of emotional upheavals.

This is the reason why even though one feels that the phrase 'loneliness of being Rajesh Khanna' would lead to a depressing read, a la the kind of tales that have been told about a Guru Dutt or a Meena Kumari, it is hardly the case as the books makes for a supremely engaging read that brings together facts so wonderfully well that it almost seems like a fictionalized account of the man who is nothing short of a legend even after his death.

Of course in a book like this, there is always a line that separates truth from the complete truth. Since none of the immediate family members (Dimple Kapadia, Twinkle Khanna, Rinke Khanna, Akshay Kumar) have spoken to the author about the man, it is left to other close friends, family members, acquaintances and film personalities to be relied upon. As is apparent, they are happy to go on record about what made the man - who once had 17 sensational successes in succession to his credit - went on to hold his own 'darbaar' and lived like a King. However, not many hesitate in talking about his low period either.

No wonder, one gets to know in so much more detail about the meteoric rise of Rajesh Khanna, some of his average movies too turning out to be blockbusters, some of his good movies turning into failure due to sheer bad luck, the trust and confidence he exuded from filmmakers even during his low period, his flair of giving at least one major hit ever year even in this period, the rise that he went on to enjoy all over again in the 80s, some emotional decisions made by him when it came to signing films, his entry into the world of politics, his personal life that saw a few major love affairs, his adjustment to the changing equations around him, his rivalry with Amitabh Bachchan and a lot more.

In this eventful journey of his, Chintamani almost seems to be a co-partner as he goes in good details by even bringing to fore some of the exact conversations that took place between Rajesh Khanna and the people around him who have been featured in the book. This leads to quite a few revelations:

- In the Filmfare-United Producers Combine Talent Hunt, Rajesh Khanna (then Jatin Khanna) managed to beat Vinod Mehra by only one point

- For Aap Ki Kasam, when a scene was being canned, Rajesh Khanna was required to deliver the same shot seven times in a row due to an uneven crane movement and he complained not even once

- He had acted in an entertaining film called Maha Chor which even had a scene where Rajesh Khanna questioned God, which was pretty similar to Amitabh Bachchan's scene in Deewar

- In Dhanwaan, he had played the part of a man possessed with love for a woman, something that was repeated by Shahrukh Khan in Anjaam

- Souten was supposed to star Parveen Babi who later walked out at the behest of 'the biggest star of the day'. Later Zeenat Aman was approached but due to date issues, Tina Munim was ultimately roped in

- Amitabh Bachchan was originally signed for Avtaar but director Mohan Kumar opted for Rajesh Khanna at the last minute, hence resulting in a memorable affair. Later, Bachchan Sr. went on to do Baghban

- When young Govinda was overzealous in his attempt to steal the limelight in Swarg, Rajesh Khanna politely reminded him that he was still THE Rajesh Khanna and could walk over him, if he wanted

- Sohail Khan had sent feelers to Rajesh Khanna about buying off his bungalow Aashirwad, but the veteran actor didn't budge from his stand

- Just a year or so before he passed away, Rajesh Khanna had started building plans to remake his Aradhana

Now these are just some of the many episodes about Rajesh Khanna that make this book a highly engrossing read, hence making it a must-buy indeed.

Do go for it, the book more than just sheds the light on the man who had never been known better before.