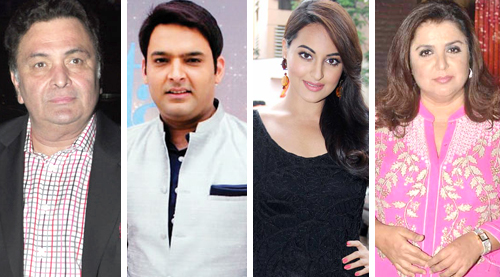 Readers are aware of TV star Kiku Sharda's controversy who has now created a stir over a over a joke. Kiku Sharda, a popular comedian, recently had to face serious

repercussions like legal action after he made fun of self-proclaimed godman Gurmeet Ram Rahim Singh, known for his film MSG: Messenger Of God. Many colleagues of Kiku Sharda from the TV as

well as Bollywood industry have voiced their support to the comedian,


Rishi Kapoor: "See this picture! I would like to play this rockstar in a film. Let me see who puts me behind bars? Go Kiku Sharda!". (He posted a picture of Gurmeet Ram Rahim Singh from his


Sonakshi Sinha: "Someone imitates god - nothing. Kiku imitates someone - gets arrested. This is wrong on SO many levels it's not even funny."


Nimrat Kaur: "So a professional comedian can be jailed for recognising an unintentional one. No laughing matter."


Paresh Rawal: "In Bengal a cartoonist was n in Haryana a comedian is arrested ! Free Kiku . It's an opportunity for Baba to spread love n happiness ."


Twinkle Khanna: "A country where everything is sacred except laughter #KikuSharda"


Boman Irani: "First things first, If the man has sincerely apologised could someone please put him out of his misery!!! #kikusharda"


Vishal Dadlani: "Heard @kikusharda 's been remanded to judicial custody for mimicking RamRahim on TV! Absurd! RamRahim's 'films' are the real joke, anyway! Comedy is meant to be irreverent,

& to take the mickey out of EVERYTHING! Seems like we're going full-medieval in India, though! #FreeKiku Comedy brings joy ), unites people in laughter! Religious-leaders prey on the insecurity of

'followers', are a blight on humanity! #FreeKiku"

Anurag Kashyap: "Gurmeet Ram Rahim insults the sensibilities of anyone who is sixth class pass with his MSG films.. Why is he not arrested??? Really the man who has to call himself Insaan

to prove he is maybe a human, is of such weak disposition that he gets a comic arrested.. This arrest of Kiku Sharda , the way it happened, and for reasons that it did is the really the rock bottom


Shirish Kunder: "Changing my bio to 'Godman'. I've 2.47 lakh followers. Anyone making fun of me will now be arrested under section 295A of IPC."


Sophie Choudry: "WTH?!!!!!! This is insane!!! We have really lost the ability to laugh at ourselves.. Hope u ok @kikusharda"


Jay Bhanushali: "What is happening in our country? A comedian job is to entertain the audience..it was just in good humour y only @kikusharda blamed"


Ranvir Shorey: "Only a court in Haryana would want a comedian in custody, and criminals as law makers! @kikusharda isn't the one who should be in jail!"


Vir Das: "Congratulations India on speedily arresting someone for comedy. Now maybe you can do the same for actual crime soon."


Mini Mathur: "Again..We are so easy to offend. This is a comedy show for f*^@s sake!! It's MEANT to show us the lighter side. Oof! The agenda is to systemically silence all opinion & free


speech. So no one can question anything anymore. Can't everyone see it? #KikuSharda Poor @kikusharda was doing his job. One that he is great at. Funny no one arrests him when he takes the piss out


Pritish Nandy: "Not the law @TheBakraMan, its law enforcers. They dance to the tune of VIP clowns. Sad to see #KikuSharda apologise."


Cyrus Broacha: "We don't need comedians our law is funny enough. The arrest of #KikuSharda is a great example of absolutely 'A' level #bullshit"


Ashoke Pandit: "I know Kiku Sharda as a great human being apart from being a grt actor.He has apologised & hence shld be pardoned by #BabaRamRaheem."