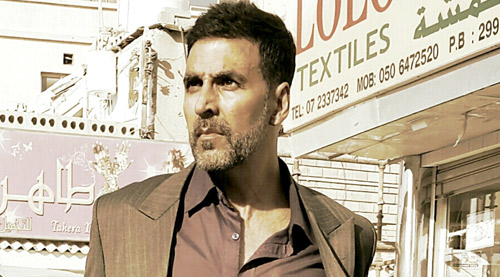 There are two factors common with the aforementioned films - a) Each of them features Akshay Kumar as the central protagonist and b) There is a strong patriotic angle to each one of them.

Call it a trilogy of (subtle) patriotic films from Akshay Kumar which manage to convey a point without resorting to chest thumping roars of 'Mera Bharat Mahaan', but the fact remains that this is one space that the actor has managed to create of his own. No wonder, his steady and loyal fan-base now believes that it is high time these efforts are acknowledged by powers that be. First step in this direction is the demand for 'Tax Free' status which is being put forth incessantly for the last few days.

"In Holiday, Akshay played an Army officer who, along with his capable team, manages to flush out a bunch of terrorists from different parts of the city. So impressed was M.S. Bitta, the chairman of the All-India Anti-Terrorist Front (AIATF), that he publically urged the Government to make the film tax-free. Last year's Baby had Akshay Kumar playing a RAW agent, who embarked on a global mission to eradicate terrorists. Again, there was a demand to make the film tax-free, this time from his super-strong fan base," informs an observer.

Unfortunately for both the films though, the demand wasn't met.

"Hopefully this would be acknowledged by the Government for Airlift," says a prominent filmmaker, "If not the film or the businessman that Akshay is playing, the Government can acknowledge itself for the work that this country did 25 years back. It was the Government that collaborated with Air India to help evacuate 1,70,000 Indians from Kuwait after Iraq raided the country. The feat was even recorded in the Guinness Book of World Record. If the film is made Tax-Free, a much larger number of people would watch it in theaters. What better way to publicize the greatness of its own act than through a popular movie?"

No wonder, for last one week, 'WE WANT AIRLIFT TAX FREE' is trending on various social media platforms.

An insider comments, "What is the criteria for a film to be made Tax-Free? That it conveys a larger social message which a State government feels worthy of wider dissemination. Last year, Bajrangi Bhaijaan was made Tax-Free in U.P. Before that P.K., Mardaani and Mary Kom too were exempted from tax by a certain State governments. All of these were good decisions as these were worthy movies. There is no reason why Airlift doesn't deserve that either."

Will that eventually happen? And that too before the release itself? Well, that would be unprecedented, to say the least, as it would be a major win for the film and its messaging, not to mention audience who would have their hands full over the extended weekend leading to the Republic Day holiday, once the film releases on January 22.