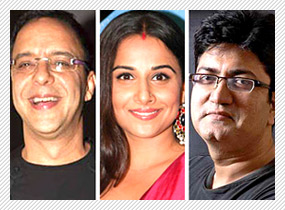 Contrary to many, the makers of Dekh Indian Circus find Bollywood as a supportive industry instead of a competitive one. This belief stems from the fact that lot of personalities came out to assist the project without any commercial motive. They just wanted to support a good film and a deserving team.

The makers initiated the project without any strong foothold or affiliations in the industry. The project was driven by an amazing script that everybody wished to be transformed onto the screen.

It started with the noted lyricist Prasoon Joshi joining hands to write the lyrics without any expectation just because he loved the content. The same was the case with Shankar Mahadevan and lead to Shankar-Ehsaan-Loy composing the music. Laxman Utekar, the top DOP of TV commercials and Bollywood (Blue, English Vinglish) too joined hands. "They selflessly came on board with a big heart and have supported us throughout," says the Producer Chirag Shah.

After seeing the film, Imtiaz Ali was so touched that he agreed to be the presenter of Dekh Indian Circus. Director Mangesh Hadawale recalls, "Imtiaz Sir did this for his emotional attachment with the film. He said he will do all he can to help it reach a wider audience."

Vidhu Vinod Chopra saw the rushes of the film and loved it enough to extend his generous support. Vidya Balan, R. Madhavan and Sanjay Dutt too chipped in with their encouragement.

"We are very thankful to all of them for their wholehearted love. We are glad that the film stood up to their collective faith by bagging 4 National Awards," says producer Mahaveer S Jain. "If the entire Industry stands up to young filmmakers and quality content, we will truly see a cinema revolution in the country and compete with the best internationally," he adds.