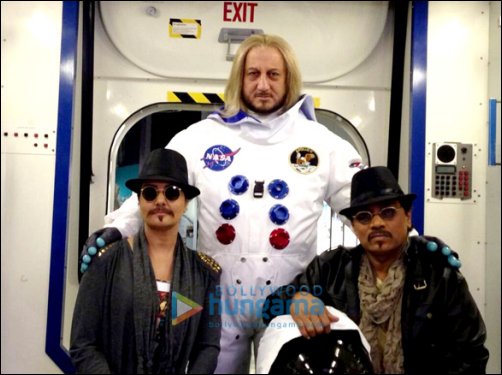 After internationally acclaimed film Silver Linings Playbook and Special 26 and playing a pivotal role of Joginder Singh Brar in romantic comedy film Yamla Pagla Deewana, Anupam Kher is ready to surprise his fans again with the much anticipated sequel of the film. He will soon be seen as a quirky and hilarious villain called 'Joe Armstrong' who has a mad idea of building a virtual mall in director Sangeeth Sivan's upcoming film Yamla Pagla Deewana 2 (YPD2).


Over the weekend when Kher was shooting at the National Space Centre in Leicester, UK for YPD2, he felt like a kid when he visited the place for the very first time. The cast of the film was shooting there during the nights. A source close of Kher says, "He was enthusiastic in exploring the universe at length at Sir Patrick Moore Planetarium and Rocket Tower there and learned some bizarre facts about space suits and space world. But only after wearing the spacesuit, he realised that how tough it is to move with it as it's really very difficult to bend or sit properly with that heavy suit. He was literally on cloud nine after the shoot."


"I am playing Joe in YPD2 and this dude is funnily deadly. Finally, the shooting of Yamla Pagla Deewana 2 is wrapped. I had great fun shooting with Johnny Lever and Sucheta Khanna at National Space Centre. It is an amazing place to be in. It's educative and entertaining. I felt like a kid with popped out eyes like the first time I went to see planetarium with my parents and younger brother. I want to thank the National Space Centre again for the great education during shoot," says Kher.


While Dharmendra, Sunny Deol and Bobby Deol will reprise their roles from the previous film, the sequel also features Johnny Lever, Annu Kapoor and Sucheta Khanna, Neha Sharma and Kristina Akheeva in key roles. YPD2 is set to release on June 7.