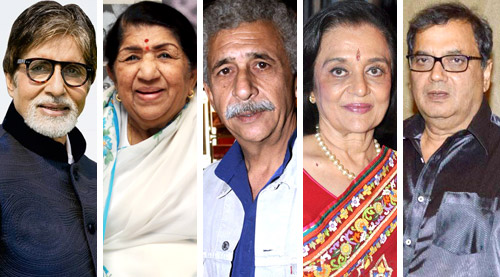 Amitabh Bachchan: "Ganga Jamuna. Why? Because..."

Saira Banu: "Ganga Jumna. Perfect script. Perfect film in every aspect. His performance was the best in every film and yet he out-did himself in this film. Hats off."

Lata Mangeshkar: "He is my all-time favourite hero, maybe because he's my Bade Bhaiyya and I've been his Choti Bahen for years now. I love all his films. But Mughal-e-Azam and Ganga Jamuna are my favourites.

Naseeruddin Shah: "My favourite Dilip Kumar film is Mughal-e-Azam. It is certainly one of the greatest films made in India. Except for the wig which marred his look, his performance is exceptional for its understated intensity and dignity. His performance in Amar is another favourite."

Raakhee Gulzar: "I had the privilege of working with him in Shakti. There is so much to learn from him. All his performances are master classes. But if you insist I pick favourites it would have to be Ganga Jamuna and Sagina.

Javed Akhtar: Dilip Kumar is to Indian film acting what Panini is to Sanskrit, Newton is to Science and Ghalib is to poetry. My favourite Dilip Kumar film? Tough to choose one. I like him equally in Ganga Jamuna, Madhumati and Devdas.

Asha Parekh: "It's very difficult to pick one favourite. He was so good in all. But I'd say Ganga Jamuna. He carried off the rustic look so effectively."

Subhash Ghai: "I had the privilege, honour and pleasure of directing India's greatest actor in three films. It's hard to pick my favorites. But it would have to be Devdas, Ganga Jamuna and Mughal-e-Azam."