Last night, the HT Style Awards 2019 were hosted in Mumbai, and no wonder, it was a star-studded night with a lot of fun, dancing, singing, and of course, an overload of glamour and style. Almost all the celebrities were present at the function and made it even better. Since it was the style awards, the leading ladies of Bollywood were all dressed to their T and we had a hard time hand-picking the best looks from the night out for you. From Kareena Kapoor Khan to Anushka Sharma to Taapsee Pannu, the ladies had their fashion game on point. 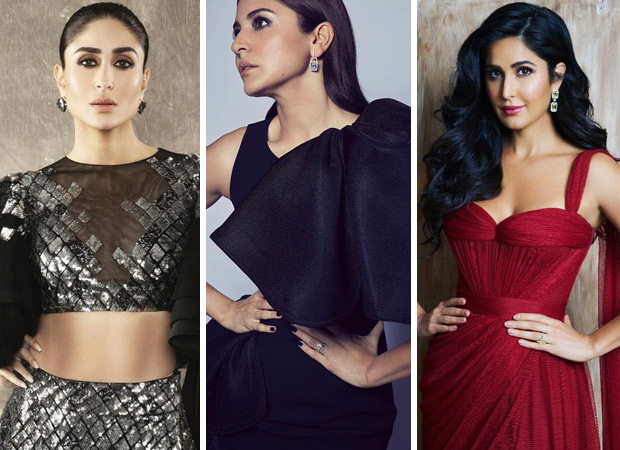 Here are some of our absolute favourites.

Ever since the awards’ season is upon us, this is the first event attended by Kareena Kapoor Khan. She had prior commitments to tend to which is why she couldn’t attend the previous functions. However, she got her fashion game on point last night as she was dressed in a black and metallic grey Manish Malhotra lehenga. She really did pull at Pooh from Kabhi Khushi Kabhie Gham last night as she donned black diamond studs for accessories and minimal makeup with kohled eyes. On the work front, Kareena has already started shooting for her upcoming film with Akshay Kumar, Kiara Advani, and Diljit Dosanjh titled Good News. Post Good News, she will start working on Karan Johar’s magnum opus multi starrer, Takht.

Anushka Sharma is another actress that was spotted at an awards night after a very long time. Dressed in a gorgeous Toni Maticevski gown and we honestly couldn’t take our eyes off of her. She paired her outfit with a stunning pair of diamond earrings from Diosa by Darshan Dave. With sleek straight hair, and smokey eyes, she won a lot of hearts with her look. On the work front, Anushka Sharma will be seen starring in Kaneda, a romantic comedy film titled after the Punjabi pronunciation of the country Canada.

Katrina Kaif looked ravishing in red as she wore a thigh high-slit gown from the house of Ester Abner, a designer hailing from Moscow. As usual, she kept her accessories minimal with Diamonds drop-down earrings from Diosa jewels and her hair let down in soft curls. On the work front, Katrina Kaif is gearing up for her Eid release opposite Salman Khan, Bharat. Apart from that, she has also been roped in as the leading lady for Akshay Kumar starrer cop film, Sooryavanshi.

Kiara Advani is one of the few new faces in Bollywood who are aware of how to put their best foot forward when it comes to styling and fashion. She opted for a beautiful organza colored halter blouse with trail with an embellished collar by Shehlaa Khan and paired it up with ombre pants. With her hair tied in a ponytail, her ensemble left jaws dropped! On the professional front, she will be seen playing a small role in Karan Johar’s upcoming period drama Kalank. She has also completed her shooting schedule for Good News where she is paired opposite Diljit Dosanjh and Kabir Singh where she is paired opposite Shahid Kapoor.

Taapsee Pannu ditched the usual trend of wearing a gown to award functions for a crisp white shirt paired with embellished pants by husband-wife designer duo Francis Leal and Karen Daccarett. Her outfit did not only make her stand out of the crowd, but she looked absolutely stunning as she completed her look with her trademark curls flowing down. For accessories, she chose a string necklace and statement earrings from Her Story Jewels. In terms of work, she recently had a big release with Sujoy Ghosh’s Badla and will now be seen in Mission Mangal.

Sonakshi Sinha looked all sorts of glamourous with her royal blue Atelier Zuhra. The colour and the over-all ensemble left us bedazzled. To top it all, she paired it up with gorgeous diamond earrings and necklace from Zoya Jewels and her eye makeup stole the show for us. For her hair, she had a stunning retro look which looked perfectly synced with her outfit. As of now, Sonakshi Sinha is busy promoting her upcoming multi starrer Kalank.

Last seen in Happy Phir Bhaag Jayegi, Diana Penty looked no less than a goddess at the function last night. She was dressed in a black shimmer thigh high-slit gown with elaborate sleeves by Dolly J Studio as she looks all set to re-join the superhero crew. With no accessories and minimal makeup, Diana opted for sleek straight hair with middle partition and honestly, we wouldn’t have it any other way. Her outfit was enough to complete the look. She was last seen in Parmanu – The Story of Pokhran opposite John Abraham and there are no confirmations about her upcoming projects yet.

We’ve made our pick, now it’s for you to tell us which actresses look you like the most.

Kylie Jenner soaks in the sun in tiny orange…