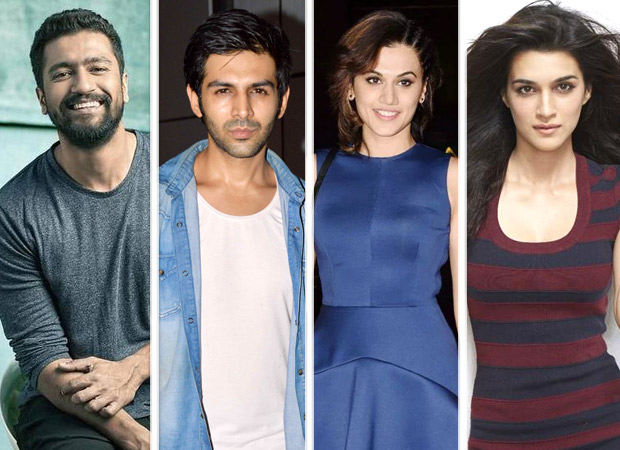 A large credit for that must go to the young stars who made it happen - Vicky Kaushal, Kartik Aaryan, Kriti Sanon and Taapsee Pannu.

These are the boys and girls for whom it was just a matter of time before stardom came their way in a big way. Each one of them had showed promise and even delivered successes earlier. However, the manner in which their respective films have done in 2019, one can now peg good money on them in films to come.

Vicky Kaushal had started off with a rather offbeat Masaan. However, he impressed one and all in a supporting role in Raazi, the Alia Bhatt starrer that turned out to be a Blockbuster. He had a role almost equal to that of Ranbir Kapoor in Sanju. The game changer though was Uri - The Surgical Strike which emerged as an All Time Blockbuster.

The film is now in the Top-10 All Time Highest grossers list and has already crossed Rs. 245 crore at the Box Office. One waits to see how Vicky's next film (said to be a horror thriller) performs. He has also been signed up by Karan Johar for his magnum opus Takth and has fitted in the big shoes of Shah Rukh Khan for Saare Jahaan Se Achcha.

Kartik Aaryan has tasted stardom now, and how. His graph was always on the rise, though what he needed was a big hit where he was the solo lead and the opening came due to his presence. From Pyaar Ka Punchnama to its sequel and then Sonu Ke Titu Ki Sweety, he was delivering good successes already. Luka Chuppi has turned out to be a game changer though as all his earlier three successes were with Luv Ranjan but in case of Luka Chuppi there was a new director in the form of Laxman Utekar.

With Luka Chuppi churning out Rs. 91 crore and still counting, the film has seen one of the biggest ROIs already. No wonder, Kartik is now gearing up for Pati Patni Aur Woh before end of year and 2020 would be special too with Imtiaz Ali and Anees Bazmee's next. What he needs to do now is take forward his stardom to the next level.

Ditto for Kriti Sanon, who started her career with a hit Heropanti and then impressed one and all with Bareilly Ki Barfi as well. She was around while showing good promise already. With Luka Chuppi she has delivered even better as the film has turned out to be a solid Superhit. She now has a hot-n-happening 2019 ahead what with three releases lined up in quick succession - Dinesh Vijan and Rohit Jugraj's Arjun Patiala, Sajid Nadiadwala and Farhad Samji's Housefull 4 and Ashutosh Gowariker's Panipat.

As for Taapsee Pannu, there is no stopping the actress who has already been seen in a Rs. 100 Crore Club hit Judwaa 2. However, the young woman has a lot more shades to her, as evidenced in films like Mulk, Manmarziyaan and Soorma, all of which released last year.

The game changer though has been Badla where she was pitched opposite none other than Amitabh Bachchan. With the film requiring her to lock horns with the legendary actor in a verbal duel, she had a job in hand. However, she impressed and how in this crime suspense thriller which has already netted Rs. 80 crore and is still counting.

While the film has been a Superhit already, Taapsee now has an eventful year lined up ahead of her. She has already completed shooting of Mission Mangal where she shares screen with her Baby and Naam Shabana leading man Akshay Kumar. Then there is Saand Ki Aankh which brings her back with Manmarziyaan director Anurag Kashyap. While former is set to be a biggie, the real test would be for Taapsee to deliver a good success in the latter. That would indeed consolidate the star status that she is enjoying and which is there to stay.

First quarter of the 2019 has already been eventful and one now hopes that there is a lot more up in stores in the second quarter as well with many more surprises in store.