Fans across the nation can't want to watch the premiere of India’s favourite reality show Colors' Bigg Boss Season 16 which promises an unprecedented dose of glamour and entertainment. After months of anticipation, the viewers are all set to witness the extravagant Bigg Boss house tonight. Here are the glimpses of the most coveted house styled in the vintage circus era with Bigg Boss as its ringmaster. The premiere will have India’s most loved and Dabangg host Salman Khan welcome the contestants with his signature charm. 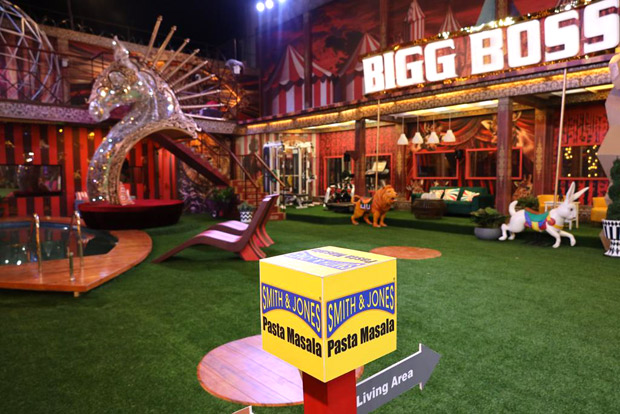 You might have been to a circus as a kid, but have you ever wondered what it’s like to live in one? Nothing made us believe in magic quite like it. Much like the circuses we’ve seen, the Bigg Boss house encapsulates a world of fantasy where nothing is what it seems. The wonderland of a house is sure to wow the viewers and contestants with its dream-like opulence. With their knack for enlivening the flavour of the season, creative minds Omung Kumar B. and Vanita Omung Kumar have curated an exquisite fantasyland. This year, Bigg Boss is about to change the game and the house echoes that sentiment with a plethora of grand elements seeded into its décor. Let’s take a tour of this one-of-a-kind circus.

THE CIRCUS OF LIFE

Defying the convention of 15 years, this season the contestants will enter the house through a colourful tunnel that opens right into the living area. The contestants will get a 360-degree view of the majestic circus as soon as they enter. Detailed and intricate designs of the elements of the theme will be seen in every nook and corner of the house. The main garden area has been styled as the backyard of a circus. Its prime attractions are the grand sculpture of an attention-arresting horse made of a beautiful mirror mosaic, near the pool and especially curated poetry for the inmates. The bathrooms have been fashioned as tents in the backyard of the circus. Trading secrets has been an integral part of the game and the house has a glass cubicle area designated for the purpose. Two giant legs of Pinocchio rest above the cubicle and its feet serve as a seating area. Flamboyant and right out from the world of fantasy, the Bigg Boss house has an ornate mezzanine floor and a ‘maut ka kuaa’. The dining area is a vibrant carousel and the confession room is a circus wagon. From clowns to a carousel, the house has all the components of a circus. 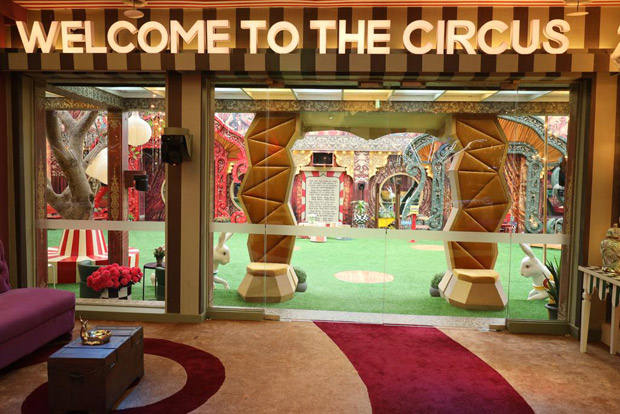 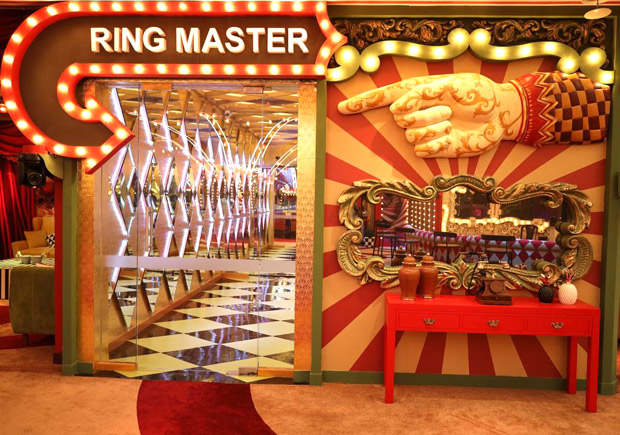 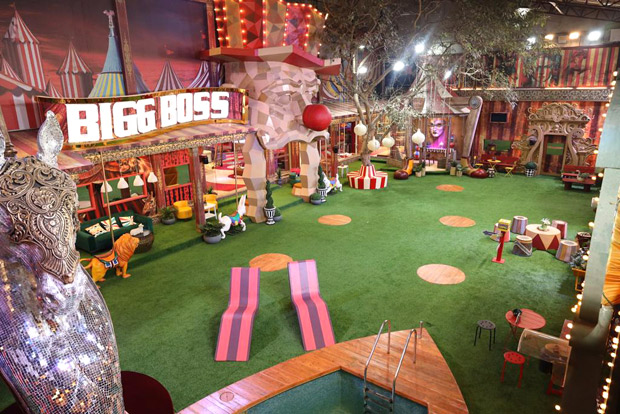 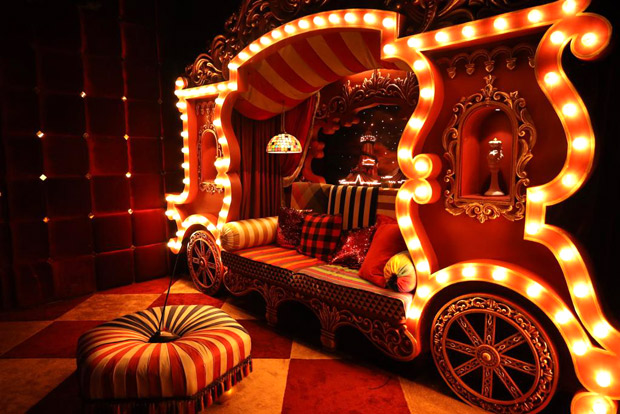 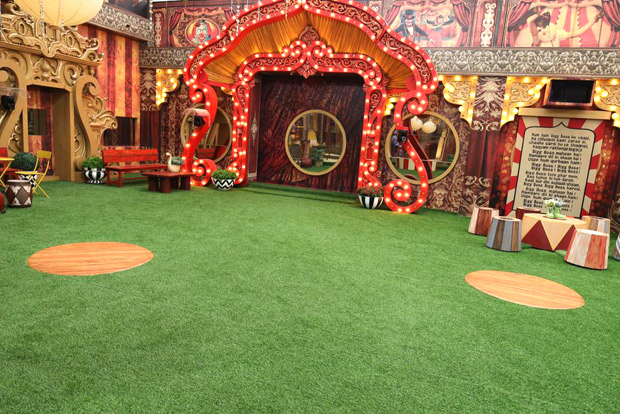 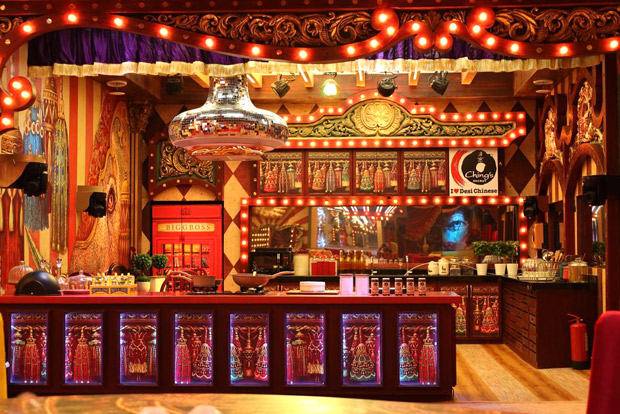 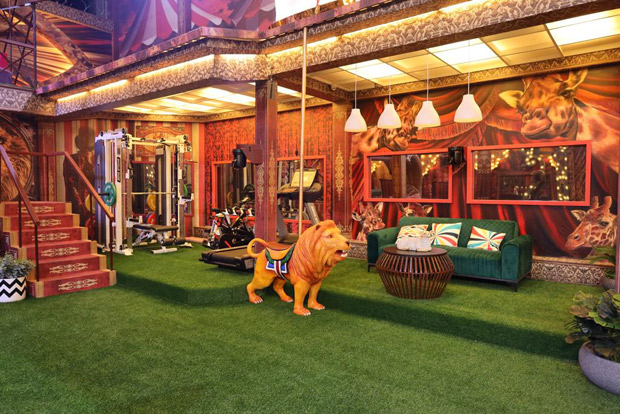 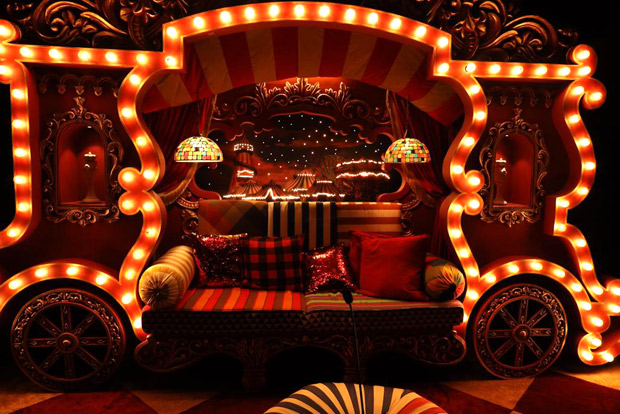 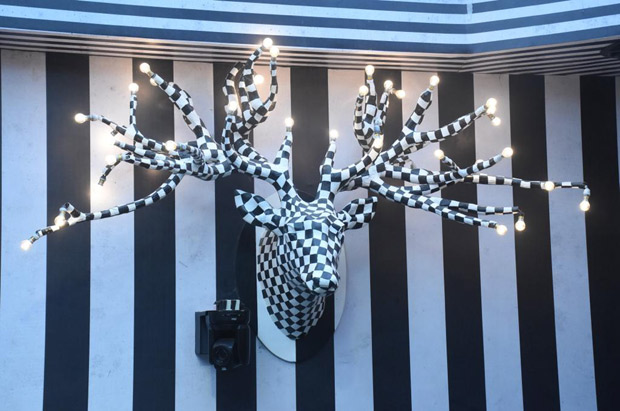 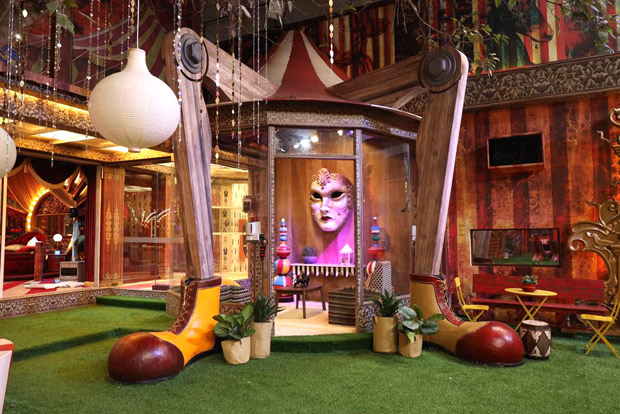 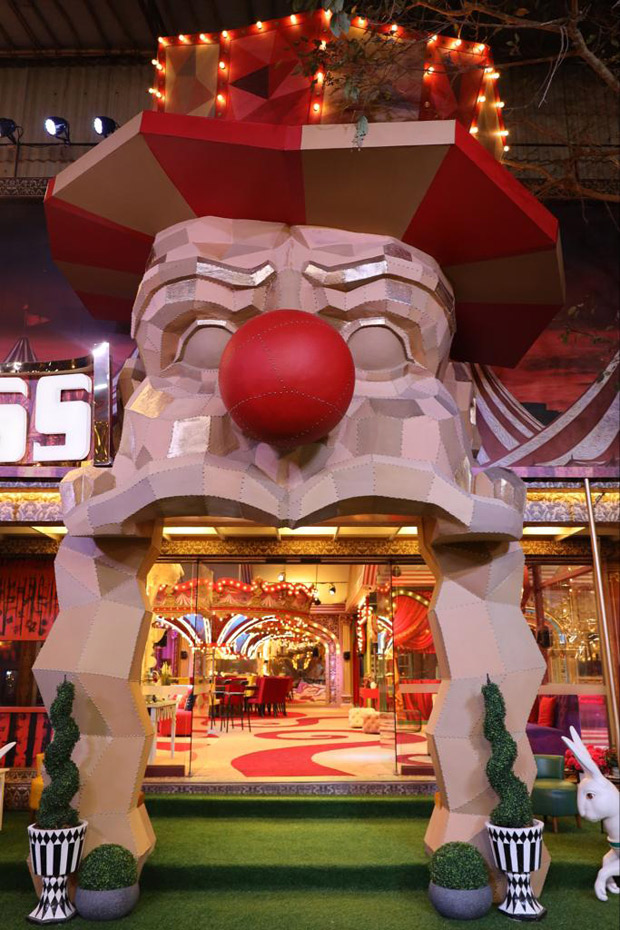 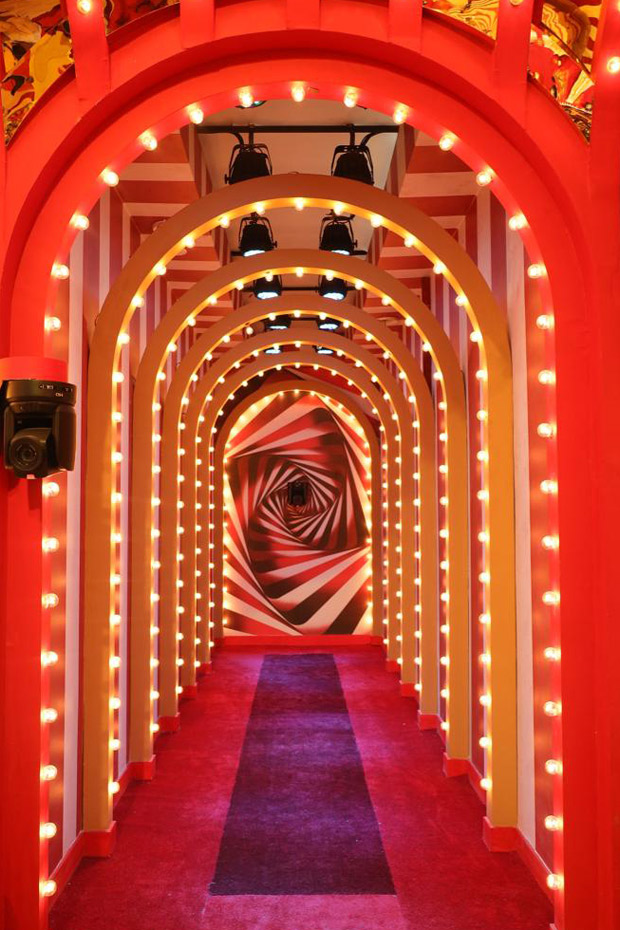 A QUARTET OF COMFORT

For the first time, there will be four separate bedrooms and they will have a unique ambience and a certain set of amenities. Moving from the tradition of 15 seasons, this edition will spring an interesting twist with the bedrooms being ranked in a hierarchy of comfort. Gloomy and hell-like, the ‘Fire Room’ is a space of danger that will test the resilience of contestants. This room has low-lying beds, a common storage unit, and the least amount of comfort. In the ‘Black & White Room’ every element right from the floor, carpet, and table to the wall is in the shades of black and white. Straight out from a mimer’s world, this room has two sofas, two beds with storage, and a side table. Housing a private seating area, the ‘Cards Room’, has a mystifying vibe with large cards looming over its walls. A grand room called the ‘Vintage Room’, has velvet panelled beds, cushioned wall panels, an adorned mirror, the iconic eye of Bigg Boss, storage, washroom, fireplace, and many such luxurious fittings. ‘Captain Room’ is a huge and sumptuous space that has a jacuzzi, a huge and gorgeous bed, a private restroom, private seating, and many other comforts. How the housemates will earn these comforts along with the race for captaincy will be exciting to watch! 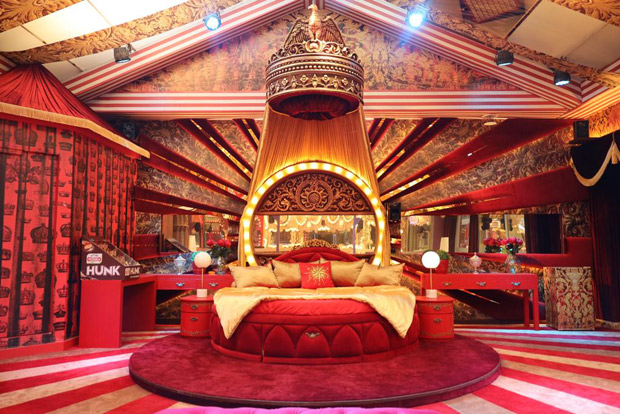 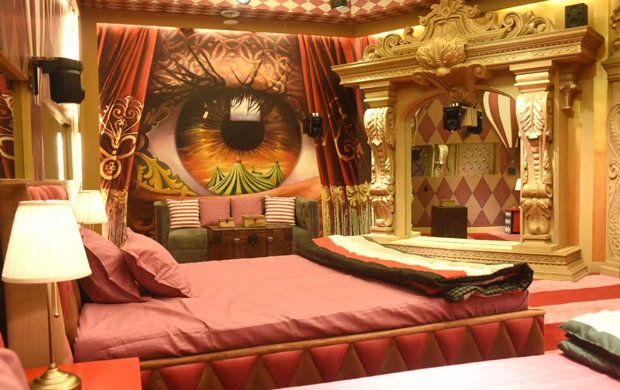 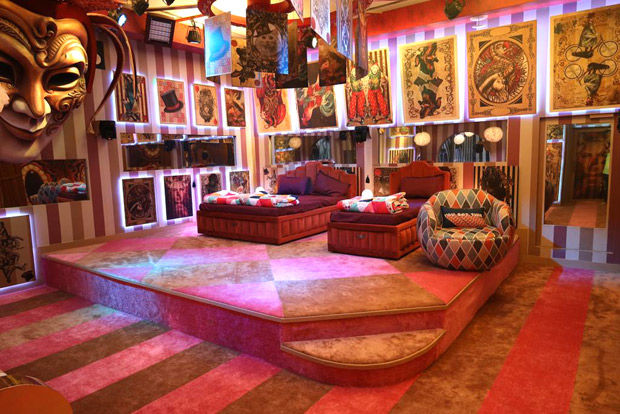 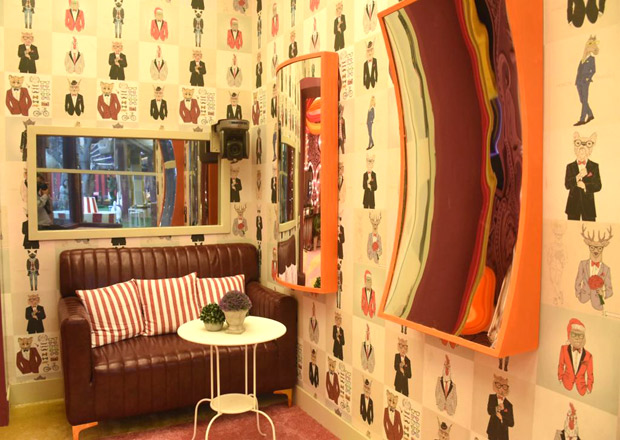 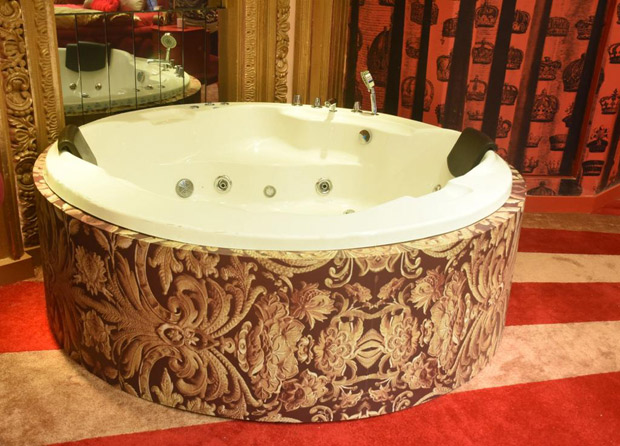 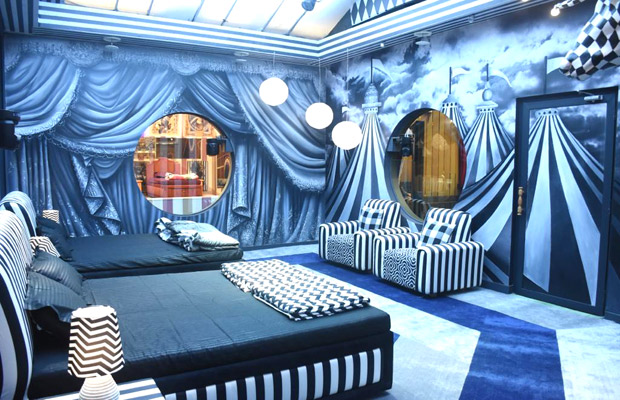 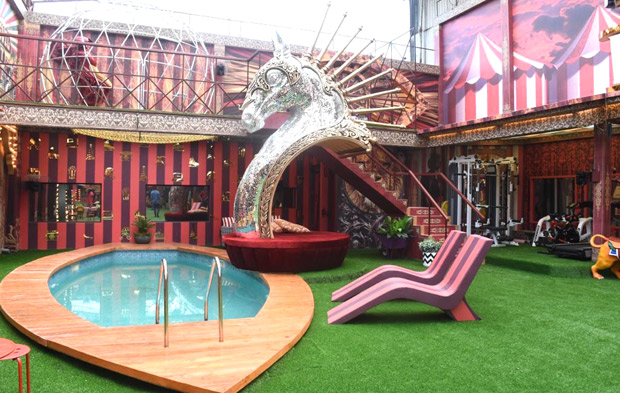 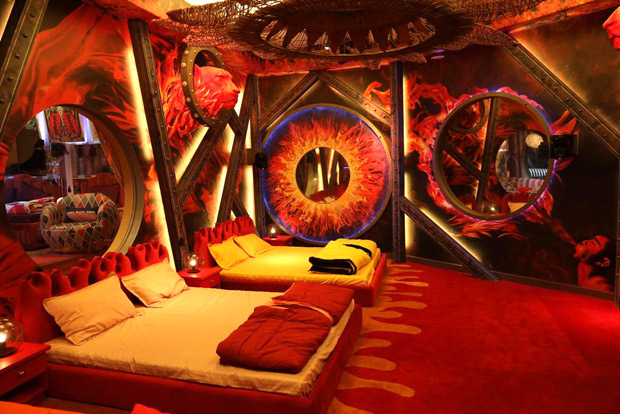 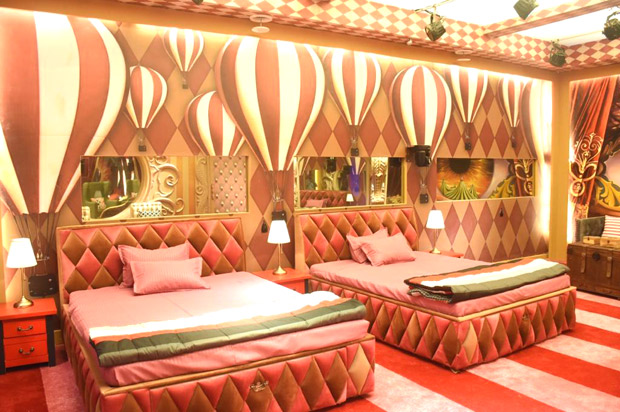 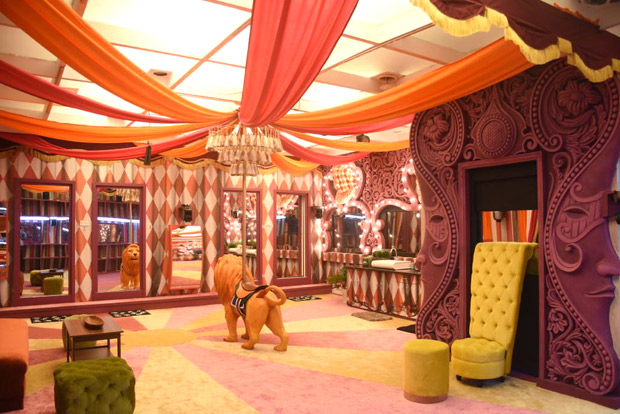 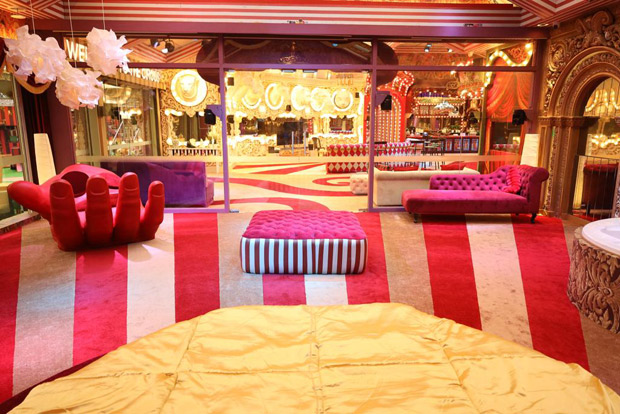 This season, the kitchen has a grand carnival-like setup embellished with marquee tassels, elephant paintings, and everything that denotes the circus era. A visual treat, the dining area is designed as a massive carousel placed at the centre of the house. Every year, the confession room witnesses contestants in their vulnerable element, and for Season 16, it has been shaped into an elaborate circus wagon. 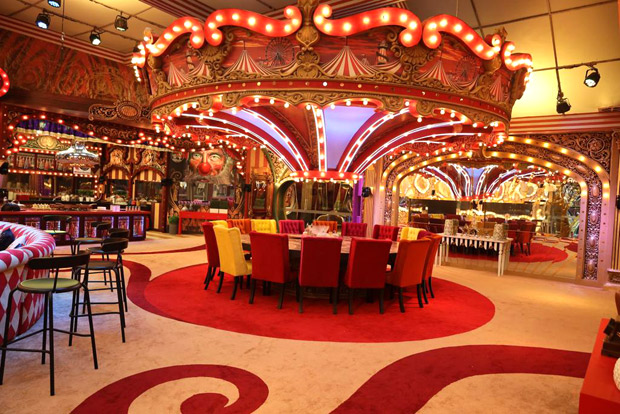 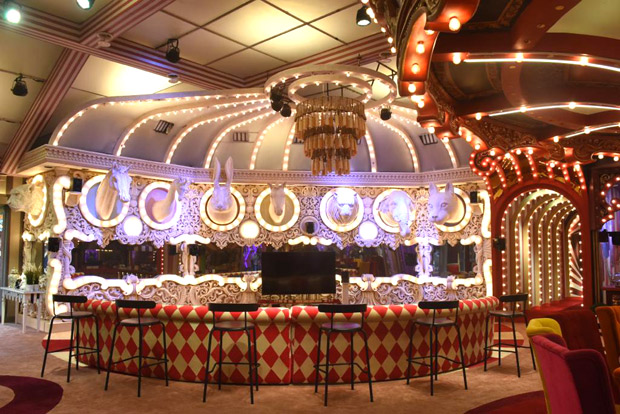 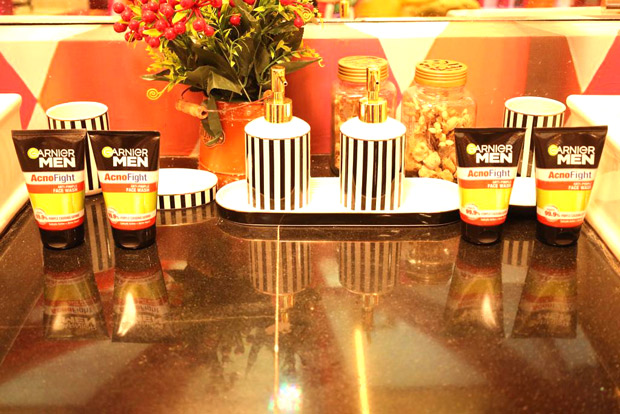 Speaking about designing the house, Art Director Omung Kumar B. and Production Designer Vanita Omung Kumar jointly said, “This season, the Bigg Boss house manifests into a circus for the first time. Growing up, many of us have seen how the circus captures the perfection and magic of human power and abilities. The theme is special for us because it symbolises overcoming barriers and hardships while entertaining the crowd. We love the world of La La Land and it reflects in the way we’ve designed our own space. We were happy to draw parallels from our favourite wonderland for the Bigg Boss house. Mirroring the flamboyant aesthetics that we treasure, the house has a few pieces of art and paintings hand painted by me (Omung Kumar B.). We’ve tried to bring out the world of fantasy, fun, sparkle, and magic with the interior of the house to revive the era of the vintage circus. We wish the contestants luck as they walk over tightropes, hang in balance, and put on a great show at the behest of the ultimate ringmaster BIGG BOSS.”

Watch the game change like never before! Bigg Boss 16 premieres tonight at 9:30 PM and thereafter airs Monday to Friday at 10:00 pm and Saturday-Sunday at 9:30 pm only on Colors and Voot.

ALSO READ: Bigg Boss 16: MyGlamm on board as official make-up partner for the reality show