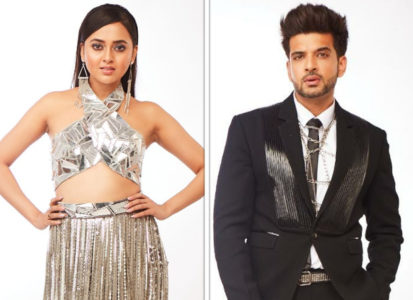 It all happened after the task got over and Karan went to Tejasswi for talking things out. Karan asked her why she didn't listen to him during the task. He told her that she could have become his strength in the task but was not ready to listen to him. Responding to this the actress said, “You go and find your alternatives.”

Karan asked her whether she was hinting towards Shamita Shetty, to which she agreed and took Rajiv Adatia's name too. Post that, Karan tried explaining to Tejasswi that he wanted Rashami Desai to win the task and asked her why she had a problem with that. However, Tejasswi replied that she didn’t care about that. As the conversation went ahead, Karan asked her why was she was so active in planning and plotting with Nishant Bhatt and Pratik Sehajpal, instead of him. Hearing this Tejasswi got furious and told Karan, “Karan please don’t bullshit me. Stop bullshitting me, I’ve seen that you’ve been bullshitting me for a while now.” However, Karan denied her accusation and asked her to be straightforward about what she wanted to say.

Responding to it, Tejasswi complained to Karan that he only came to talk to her after he was done discussing the strategy with others. Later, the actress also told him that she doesn't like the way how he treats her and mentioned how he doesn't ever feel the need to help her in the kitchen. Tejasswi says, “Main akele khana banati hoon, tune ek baar bhi offer nahi kiya ki chopping bhi wo apne aap karti hai. Tujhe wo nahi dikha? I see the way you treat me. Do you see the way you treat me?”

Further, Tejasswi clarified that she didn’t discuss anything related to the game with Nishant and Pratik.  She further said, “But see what you’re doing here Karan.” Hearing this, Karan got really upset and chose to remain silent after it.

“It was an absolute honor, privilege and a…