Ravivaar with Star Parivar aims at bringing together the cast of different shows from Star Plus as they compete with each other in a fun and interesting competition as respective families from the show. From Anupamaa to Imli to, Yeh Rishta Kya Kehlata Hai, to Pandya Store, the cast from each of these shows has participated on this interesting non-fictional show where the actors are asked to perform some highly interesting tasks. Needless to say, the winner walks away with interesting prizes after winning challenges, The forthcoming episode will feature Banni Chow Home Delivery clan engaging in a comical banter with the Pandya Store 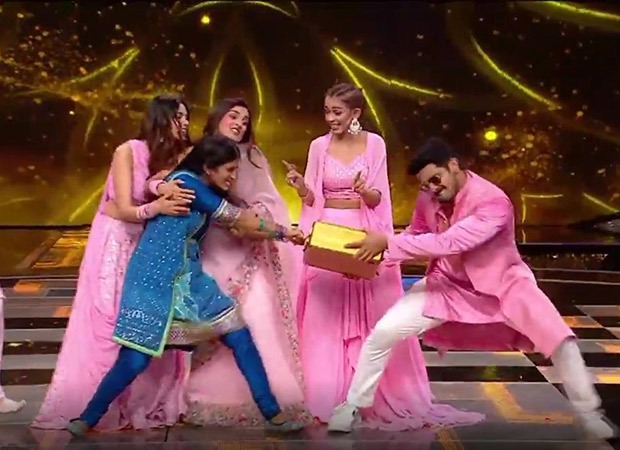 Banni vs Dhara: Pandya family compete with Banni and Rathod family in this week’s Ravivaar With Star Parivar

The previous episode of this star-studded show became the talk of the town when it hosted the lead cast of the upcoming movie Shamshera. During the show, Ranbir Kapoor, who is on the brink of fatherhood, even learnt parenting skills and also took tips from Anupamaa. He went on to assert that he wanted to be the best father to his child. Coming to this week Ulka Gupta lead actor of Banni Chow Home Delivery is in full form and she can be seen giving an open challenge to Shiny Doshi from Pandya Store.

In the episode promo, the actress is seen saying, “We are ready for the war” to which Shiny responds, “Banni tune tai kar lia hai ki tujhe mujse bair rkhna hai toh dekhte hai tujhe Pandya parivar ki dosti falti hai ya dushmani.” (Banni, if you have decided to be hostile to me, then let’s see if you can handle the Pandya family’s friendship or their hatred.)

The actors will be seen engaging in numerous fun activities on the show. This episode of Ravivaar with Star Parivaar will air on Star Plus on this Sunday at 8.30 PM.