Not too long ago, reports were abuzz with Katrina Kaif and her birthday plans. While the actress had taken off to US to ring in her husband’s birthday, fans were eagerly waiting to see what Vicky Kaushal has in store for his wife. Just a day ago, the young couple was spotted at the airport as they jetted off to Maldives and a recent series of photo dump is proof of all the beachy fun the actress had with her husband and her friends. 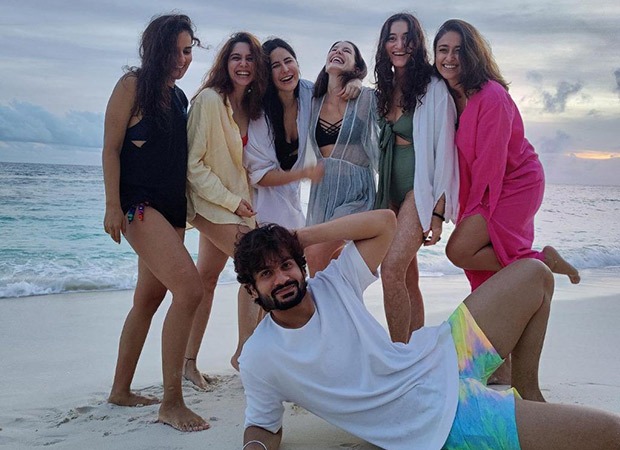 It seems that not just Katrina Kaif and Vicky Kaushal, but even their friends accompanied the duo on this leisure trip to the picturesque island. Katrina Kaif shared her birthday special photo dump on her Instagram handle, which features her complete water baby avatar as she rang in her birthday with friends Angira Dhar, Sharvari Wagh, Isabella Kaif, and Ileana D’Cruz. Brother-in-law Sunny Kaushal too posed in one of the photos.

It seems like hubby Vicky, who was missing from all the photos, seems to have turned photographers for the bikini girls. The photos feature the actress and her friends sharing some really fun candid moments. Interestingly, Sharvari Wagh and Sunny Kaushal were seen together after Karan Johar confirmed their relationship in one of the episodes of Koffee With Karan 7.

Sharing more images from the beach party, Ileana took to Instagram adding, "Sunshine, cocktails, and a bit of birthday cake". In the image, Vicky Kaushal, Mini Mathur, and Anand Tiwari can also be seen enjoying the bash.

As for work, Katrina Kaif is in a great space currently. The actress will next be seen in Phone Bhoot which stars Ishaan Khatter, Siddhant Chaturvedi, among others, and is slated to release on November 4, 2022. On the other hand, she will also be seen in Merry Christmas, opposite Vijay Sethupathi for the first time and the film, as the name suggests, will be releasing on December 23. Besides these two, the actress also has the much-awaited third installment of the YRF action franchise Tiger 3 with Salman Khan and Emraan Hashmi as well as the female-centric Farhan Akhtar film Jee Le Zara with Priyanka Chopra and Alia Bhatt in the pipeline.