Ranbir Kapoor is playing a larger than life quintessential Hindi film hero with the action entertainer Shamshera. Ranbir, who is coming to the big screen four years after he delivered the blockbuster Sanju, is relishing the casting coup in the film that pits him against Sanjay Dutt who is playing an evil, merciless, cold-hearted brute force of nature, Shuddh Singh. The actor is busy with the promotions and reached the sets of Ravivaar With Star Parivaar with Vaani Kapoor. During the episode shoot, the actor revealed that he and the show's host Arjun Bijlani have been friends in school and even played football together. 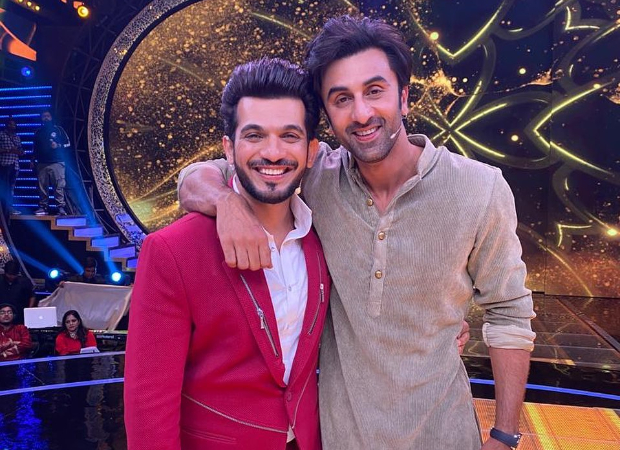 Ranbir praised Arjun and said, " Log jaante nahi hain yeh magar hum ek dusre ko bachpan se jaante hain (People don't know that we know each other from childhood). We were in the same school, the same class and the same house for football. It feels so great to see everything that you are doing. The fact that you are a father, and you are such a good host. It's really heartwarming to see a colleague of mine, a friend of mine do so well."

Arjun, who was all smiles, replied, "Thanks yaar." Ranbir tried to get out of his seat to come and hug Arjun as he said, “Kahan se aaun? (From where should I come), Arjun replied, “Jahan se bhi aa bas gale mil le yaar (Come from anywhere buddy but just give me a hug).”

Ranbir Kapoor and Arjun Bijlani both studied Mumbai's Bombay Scottish School. The actor made his debut made with Sanjay Leela Bhansali's 2007 film Saawariya. Arjun went onto make his debut in Balaji Telefilms' show Kartika in 2004. He has since then become one of the most popular TV stars starring in shows like Left Right Left, Miley Jab Hum Tum, Naagin and more.

Directed by Karan Malhotra, Shamshera has been produced by Aditya Chopra and is set to release in Hindi, Tamil and Telugu on July 22, 2022.

ALSO READ: "YRF has really given this film so much backing; it's made Shamshera a visual spectacle" - Ranbir Kapoor lauds how 2.5 years of VFX