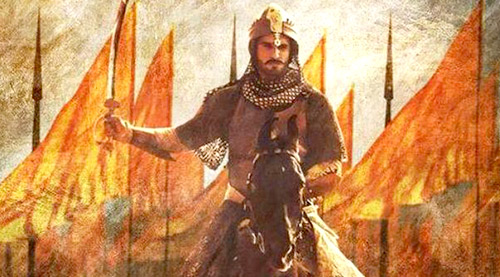 Sanjay Leela Bhansali is known for his immense love for building grand movie sets. So, when I was invited to visit the much-talked-about 'Aena Mahal' for his ambitious forthcoming film Bajirao Mastani at Film City in Mumbai, I was very excited. As I entered the gate, I was politely asked to remove my shoes. A finely ornamented Arch led me on to the magnificent 'Aena Mahal'. Pristine, finely manicured marble glowed with pride as a plethora of lights-on-top suddenly came alive. It was as if milky whiteness shimmered amidst a deluge of mirrors reflecting rare beauty. Deepika Padukone, Ranveer Singh and Priyanka Chopra have shot for the flagship song 'Deewani Mastaani' on this set. There are eight songs in the film with music by Sanjay Leela Bhansali himself.


I was awestruck with the sight of sheer magnificence and then I noticed Sanjay Leela Bhansali sitting on a cot, wearing a simple kurta-pyjama with a gao-takiya in his lap. He was smiling and I felt as if he's the king of the 'Aena Mahal'. He asked me to sit next to him. We spoke for a while. He didn't speak anything about the film. In fact he was more interested in knowing about me. "You thought of interviewing me, and here I've interviewed you," he said with a chuckle. There is something extremely simple and child like in SLB that makes him endearing. He also has a sparkling sense of humour.


It was natural for me to be reminded of the majestic 'Sheesh Mahal' from Mughal-e-Azam as I let my eyes feast on the 'Aena Mahal' which has been constructed in 45 days and designed by Sujit Shriram and Saloni. According to sources, 'Aaena Mahal' is the most expensive set after 'Sheesh Mahal' in Mughal-e-Azam. The mirrors have been called from Jaipur and have been personally selected by SLB himself. As per an official press release, 20, 000 intricately designed mirrors have been used to put the set together. Expert craftsmen from Jaipur had been called to work on the embedding of the mirrors to maintain authenticity. The massive set measures 12, 500 square feet. The press release also states that one angle of the frame reflects in the 20, 000 mirrors. The set also has 13 chandeliers which have to be lit up every time with candles and not the traditional lighting.


As I was going out, I met Choreographer/Director Remo Dsouza. He seemed to be excited about the prospect of working with SLB. I had been told that Deepika Padukone and Ranveer Singh will also be interacting with me but it didn't happen. I was taken to another set of Bajirao Mastani in Film City. It was on a massive scale with a huge wooden door (entry to the main Palace I believe). In an era of quick-fix set designing, over dependence on VFX, the effort taken to build the sets of Bajirao Mastani is highly commendable. It should be a spectacle on the big screen.