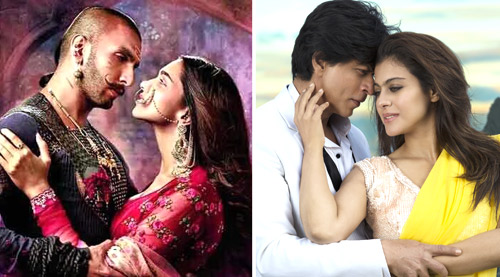 It is going to be a family outing in theaters this weekend. With as many as three open weeks ahead, a Christmas holiday and then a long New Year weekend as well, Bollywood is

pretty much looking at a Box Office bonanza from this Friday onwards. Since the target audience is families, as is the case with every Christmas release, just the right films are set for release as

The countdown has begun for Bajiao Mastani and Dilwale, and fortunately them, the content put together by the makers is such that Censor Board too acknowledged as well. Here are the

• The film has been granted a U certificate. This is one of the rare 'universal' certified films ever since one can remember, and is a huge shot in the arm for Bhansali and Co. who would

like maximum audience to step in. The war-romantic drama has been deemed fit enough for audience across all age groups to walk in and experience a piece of history on the big screen.

• The film's running duration is 2 hrs. 38 minutes. This is a perfect duration for a film of this scale and size which promises multiple chapters to unfold.

• The film has been granted a U/A certificate. Rohit Shetty has a huge fan base amongst kids and though they may not be able to step in all by themselves, it doesn't matter much since

families would anyways step in hordes. With Shah Rukh Khan and Kajol taking care of the last generation and Varun Dhawan and Kriti Sanon keeping the young ones happy, Dilwale is a family

film with tons of action involved.

• The film's running duration is 2 hrs. 35 minutes. Yet again, the duration is just perfect for this film that promises to pack in everything from romance, music, action, laughs and

It is quite uncanny that even in terms of running duration, there is absolutely nothing to differentiate between Bajiao Mastani and Dilwale, both of which have been pretty much neck

Add to this a flurry of promos that are set to release (Ghayal Once Again and Neerja are set to be seen in theaters and there are more expected to be added as well) and for audiences;

it is one double bonanza up for the grabs.

May both the films score, and score big!