1. Sujoy Ghosh is the master of seductive suspense. His film may (Kahaani) or may not (Kahaani 2) work at the box office. But there’s no doubt he knows how to play Bollywood’s Agatha Christie at a tea party with Alfred Hitchcock when Brian de Palma suddenly drop sin. Badla has a gripping plot about murder and betrayal which will have you guessing till the end. 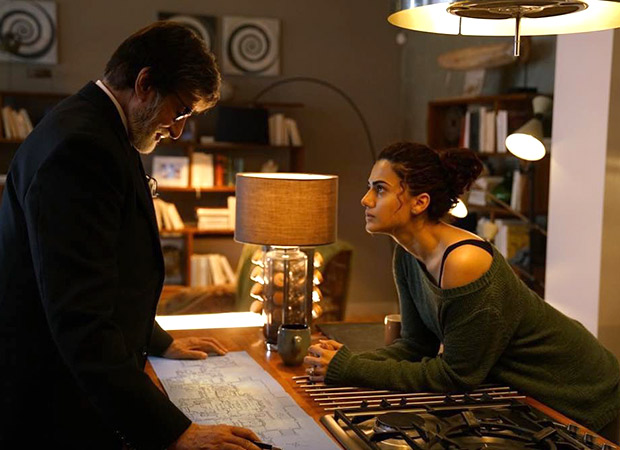 2. The Big B is back. No matter how old he gets, even after 50 years of film acting, his penchant for screen salvation remains undiminished. This is Mr Bachchan’s first release for 2019. Last year he featured in the disastrous Thugs Of Hindostan. Everyone makes mistakes, Even God. I mean, even Aamir Khan.

3. Big B & Tapsee together again after the marvellously empowering Pink. Again he plays a lawyer though a far more grounded one this time. Nothing bi-polar about this attorney. Tapsee plays his client accused of murder. Yup, there is a dash of Alfred Hitchcock in Sujoy’s brew this time.

4. Hero-Heroine but no romance. Mr B is the hero. Ms Pannu is the heroine. They are generations removed and yet they’re the plot’s protagonist, like Harrison Ford and Julia Ormond in Sabrina. Why must every lead pair be romantically involved? Badla tells you why they don’t have to be.

5. The first suspense thriller in Hindi cinema since Kahaani that will have guessing till the end. The conclusion is so unexpected you will find your jaw dropping off from you face. The build-up of the tension is nothing compared with what lies underneath.

6. Badla was a film in 1974 which starred Shatrughan Sinha as fugitive on the run. It was a hit. This Badla with Amitabh Bachchan is a world apart. But Sujoy claims to have always been inspired by the hard-core mainstream revenge sagas. “What is a film without its core of vendetta in the drama? It’s like a biryani dish without the fish,” says Sujoy. Nothing fishy about Badla.

7. Sujoy had the script for Badla with him for nearly ten years. He wanted to make it with Amitabh Bachchan and Vidya Balan. But then life has other plans. Here it is, ladies and gentlemen, the suspense film you won’t forget for a very long time.