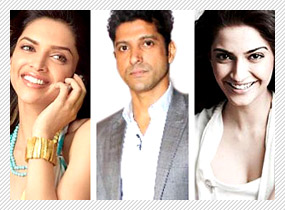 Business in Bollywood is completely unpredictable and 2013 is a proof of it. After some successful actors failed to live up to the expectations, it's time to acknowledge those for whom the year turned out to be a stroke of luck. They rose to fame and turned out to be the game changers of this year with their hard hitting performances and some of them even making it big at the commercial arena of the 100 crore club.


Om Shanti Om received a record breaking success at the box-office but Deepika Padukone's career did not take off as expected in the initial stages. After films like Lafangey Parindey and Khelein Hum Jee Jaan Sey sank without a trace, it was the actress' different avatar in Cocktail that was applauded by all. But this year, Deepika's career graph shot upwards as she emerged as the reigning queen with her four consecutive releases making it to the 100 crore club. From Race 2 to Goliyon Ki Rasleela Ram-Leela, today Deepika is the only actress to have achieved this feat. The actress might also walk away with maximum awards this year.


Starting his career as a director, his debut film Dil Chahta Hai remains a cult. But somehow, his acting career did not fare as expected. Though he was considered to be a fine performer, his box-figures surely weren't impressive especially when it came to his solo performances. His multi-starrers like Rock On! and Zindagi Na Milegi Dobara created a long lasting impact but films with him as a solo lead like Karthik Calling Karthik and Luck By Chance did not generate BO numbers. A movie on a long forgotten sports-hero with an actor who never gave solo hits wouldn't seem like a very wise move, but the response for Bhaag Milkha Bhaag was commendable as it not only entered the 100 crore club but also opened new avenues for bio-pics in Bollywood.


May it be Aisha or her debut Saawariya, Sonam Kapoor was often criticized for her acting! What maintained her position in Bollywood was her image of a fashionista. But breaking away from that image, it was in Raanjhanaa where critics raved about Sonam's acting talent. And the audience went gaga over this love story which was also Tamil actor Dhanush's Bollywood debut.


After his success in Saathiya and a few handful films, Vivek's career faced a roadblock post for the longest time! But 2013 was the year when Vivek Oberoi regained his stardom. Portraying the role of Kaal was a life changing experience for the actor as he earned the appreciation of a wide audience. In the same year, just months before his negative role garnered all the attention, the actor played one of the leads in a sequel to the popular adult comedy franchise Masti titled Grand Masti. The film caught everyone by a surprise as it turned out to be India's first adult comedy to have touched the 100 crore mark. Being a part of two record breaking box-office successes, Vivek Oberoi's career touched an all time high in 2013.