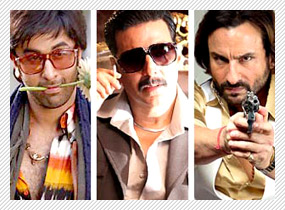 While 2013 has experienced some record breaking success with films like Krrish 3, Chennai Express and Dhoom 3, there have been some other films which created a stir before the release but failed to take off as they hit the silver-screens. Bollywood Hungama lists down some films which though seemed promising during promotions, failed miserably when they hit the theatres.


Besharam - The classic example of delivering a blockbuster and a dud in the same year! With Ranbir Kapoor's Yeh Jawaani Hai Deewani coming close to Rs. 190 crores, his Besharam releasing right after five months came in with a lot of expectations. But that turned out to be a debacle not just for this young talented star but also for the Dabangg director Abhinav Kashyap!


Once Upon Ay Time In Mumbai Dobaara - The prequel was a big success for Ajay Devgn and a career defining role for Emraan, but the sequel was a nightmare for Akshay Kumar. The actor had previously crossed the Rs. 100 crore mark with action films but the sequel to this gangster saga received a lukewarm response from both the critics and the audiences.


Gori Tere Pyaar Mein - Punit Malhotra was the lucky charm of Imran's life as the actor managed to deliver a hit with I Hate Luv Storys back in 2010 after back-to-back flops. But this time around, even Punit could not save the turbulent career of Imran Khan with Gori Tere Pyaar Mein which failed to create chemistry between Imran and Kareena.


Zanjeer - The remakes of Amitabh Bachchan starrers Don and Agneepath turned out to be huge hits at the BO. But Zanjeer remake sank without a trace! Was it the dead pan face of Ram Charan Teja or because of Priyanka's too girly act unlike Jaya's tomboyish style in the original? Whatever be the reasons, the audiences definitely rejected this one.


Bullett Raja - Saif Ali Khan's desi character Langda Tyagi is still considered one of his best roles in Bollywood, while at the same time Tigmanshu Dhulia is known for making the best 'desi' films. But the combination of the two surely did not create the potent mix that all were expecting. May be it just wasn't innovative enough!


Ghanchakkar - With the super-talented Vidya Balan and the critically acclaimed Emraan Hashmi coming together after The Dirty Picture, one had big expectations from Ghanchakkar. But the quirky husband-wife act in this comic caper received a cold response at the BO.

Phata Poster Nikhla Hero - Rajkumar Santoshi made a chocolate boy like Ranbir a comic star! But looks like this success formula did not work well for Shahid Kapoor. The film turned out to be yet another unfortunate flop for Shahid.


Matru Ki Bijlee Ka Mandola - Pankaj Kapoor, a passionate thespian has given some hard hitting performances and his association with Vishal Bhardwaj turned out to be an award winning collaboration after their critically acclaimed Maqbool. But alas! Joining hands for Matru surely wasn't the wisest of the moves. Vishal wanted to attempt a satirical take on village and its living but looks like the audiences were clueless about the happenings in the film. And also, yet another flop for Imran.


Yamla Pagla Deewana 2 - The prequel to this saw the Deols coming together after a long time and that too in a comic caper. Their typical Punjabi humour worked wonders for the first installment but the second one, not only failed to perform at the BO but also got criticized for its senseless comedy.


Himmatwala - Himmatwala being a remake of the 70s hit by the same name, surely did not impress the audience nor could Sajid Khan's sarcasm and dry sense of humour save it. Considering it was one of the biggest fiascos of 2013, Himmatwala will be remembered by the industry as the perfect spoof of its original!


Ek Thi Daayan - People may have appreciated its horror elements but they weren't impressed with Kannan Iyer's story telling skills about witchcraft. Despite having an ensemble cast of Konkana, Huma, Kalki and Emraan, the film could not woo the audience! May be it was just sheer bad luck!

Go Goa Gone - Though everyone appreciated Saif's guts to produce India's first zom-com and some of them were genuinely impressed with it, the scattered plot and chaotic storyline failed to rake in a good moolah. And Saif's blonde look though garnered attention, none of it reflected in the BO collection.


Aurangzeb - His rustic look was charming in his debut but Arjun Kapoor's second film surely was a letdown! Twin roles, war for power, none of these strong aggressive elements of Aurangzeb could save the day for Arjun.


Lootera - While the film was raved by critics for its innocent, poetic and romantic touch, people stereotyped Lootera as an art film for its slow pace and it remained just a memory in the list of parallel cinema and in terms of commercial.


D-Day - With an interesting star cast of Irrfan, Huma, Arjun and Rishi Kapoor, D-Day directed by Nikhil Advani, had high expectations. But this thriller too failed to keep up to the BO expectations.


Singh Saab The Great - We expected the 'Singh' factor to create some magic in the Northern belt of India where people are still expecting their 'dai kilo ka haath' Sunny to act like a hero to save people from slavery. But Singh Saab The Great did no good to Sunny's failing career, only to get dodged by SLB's Goliyon Ki Rasleela Ram-Leela.