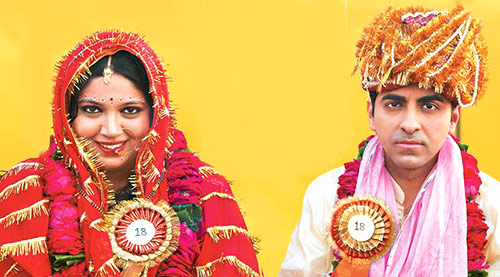 Even a month after its release, Dum Laga Ke Haisha is still doing well at the box office. In fact with more than 1 crore coming in, the Sharat Katariya directed film has created a record, with its fifth weekend being the fourth best ever since 2014, after films like PK, Queen and 2 States. For Yash Raj Films too, it is a reason to rejoice as they would now have two of their films arriving back to back in theaters as Detective Byomkesh Bakshy releases this weekend. As one waits to see if Dum Laga Ke Haisha manages to celebrate 50 days in theaters, for its leading man Ayushmann Khurranna, this is enough as a reason to rejoice.

Even though Vicky Donor was a huge hit, it was termed as 'fluke' by some. Now after Dum Laga Ke Haisha, is it truly a 'Welcome to Bollywood' moment for you?
Guess you can say that (laughs). Jab Vicky Donor release hui thi, people said 'arrey Ayushmann ke liye easy hoga', he is Punjabi after all. In fact, for me it was like sleepwalking through the character. Real mehnat mujhe Dum Laga Ke Haisha aur Hawaizaada mein karni padhi thi because I was playing a character which was just not me. I am an urban guy who has been born and brought up in Chandigarh. My Punjabi accent wasn't going away even while I was reading through the dialogues of Dum Laga Ke Haisha. I had to get the accent as well as the emotion right. Since my mother is an M.A. in Hindi and she speaks only in Hindi, I got some help from her.

Guess it was Aditya Chopra who persisted with the film's release even though you were worried about its fate after Hawaizaada.
That's right. Adi just didn't allow me to breathe after Hawaizaada. He was seeing that I was going in that zone where I was getting more and more depressed. He always believed in me as an actor and immediately after the release of Hawaizaada, he called me to his office and announced the release date of Dum Laga Ke Haisha. He said to me that public memory is very fickle and no one bothers about the past, so you should just look at the present. He has been born and brought up in the industry; he understands the functioning of Bollywood very well. He knows that perception changes after every Friday.

Well, it is indeed changing now. No wonder, your book 'Cracking The Code' makes for a good read. So the manner in which you have spoken your heart out in the book, guess there would be a lot that you would talk about when you come up with a full-on autobiography 30 years down the line, right?
(Smiles) Yeah, why not! Everyone has a story to tell and you have to be as honest and as irreverent as possible. Otherwise you would be very touchy. You shouldn't take yourself so seriously.

“It’s going to be a different me in this…