Amit Panghal has made the nation proud with his recent win at the prestigious Asian Games that is currently being held in Jakarta. The champion defeated one of the most popular players and an Olympics champion Hasanboy Dusmatov from Uzbekistan in boxing. Amidst the appreciation flowing in from all quarters, Amit expressed his desire to meet Dharmendra and received the most amazing response from the veteran superstar. 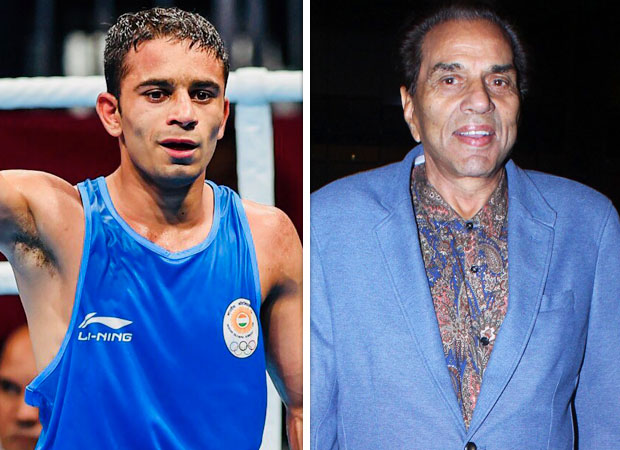 The Twitter handle of Amit Panghal has suddenly grabbed attention after he expressed his desire to meet Dharmendra. The Asian Games boxing champion revealed that his coach and his father are the biggest fans of the Sholay actor and hence he wanted to meet him. On the other hand, Dharmendra had the sweetest words for him. The veteran actor replied to the sports player in the same platform and asked him to meet him the next time he is in Mumbai. Isn’t it cute? Here’s a glimpse of their conversation:

Amit Panghal said, “I would like to dedicate my Gold medal that I won in Jakarta to my nation. Thank you everyone for all the appreciation. My first tweet is dedicated to the wishes expressed by my father and my coach. They have both been a great fan of Dharamji and have never let us change the channel even during the breaks between films. It would be a great honour for me if I could meet Dharamji.” To the same, Dharmendra responded, “Proud of you. I would love to meet you. Whenever you are in Mumbai, please let me know. Heartiest congratulations to your teacher and your family. I would pray for you to win every game and make your nation proud.”

This was followed by another series of tweet wherein Amit confirmed that he would be meeting Dharmendra as soon as he returns to the city. Dharmendra too shared a video talking about the sports champion:

Dear Amit Panghal , love you, Brave Boy , Pride of India. Love you for your great respect for your Father and your Coach. You are most Welcome!!! pic.twitter.com/xq76o4tpjk

On the work front, Dharmendra was last seen in Yamla Pagla Deewana Phir Se alongside his real life sons Sunny Deol and Bobby Deol, which released last week, on August 31.