Anushka Sharma is recently in Paris for work commitments and it seems that the actress is loving the food in the romantic city. In a recent photo shared by the actress, she gave her fans and followers a glimpse of the fun Parisian breakfast she was enjoying in her hotel room. The actress’ smile, needless to say, was a content person as she devoured each bite of her breakfast. 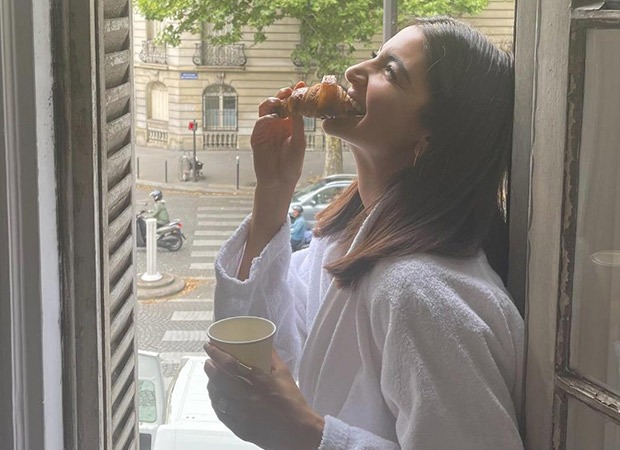 Anushka Sharma enjoying croissants in Paris will make you crave for one!

Anushka Sharma, who is not really too much of a post person, shared a series of photos on her Instagram of her taking a bite of the croissant, which is a part of their staple breakfast, as she held a cup of coffee. She was seen enjoying the breakfast in a bathrobe, standing near the window. While the view was that of the Parisian streets, the smile on the actress’ face was of happiness and content as she enjoyed each bite of the delicious looking croissant. She posted these photos saying, “When in Paris .. eat many croissants” Well true to that! Here, have a look at the post:

In fact, her photo grabbed the attention of not just fans and followers but also her colleagues from the industry. Her Ladies vs Ricky Bahl co-star Parineeti Chopra took to comments and said, “Send me some to London. Thanks and regards ” On the other hand, makeup artist Puneet B Saini commented, “And eat some for us too”. Fans of the actress too dropped heart and fire emojis as they loved to see their favourite star having fun on her Paris trip.

On the work front, Anushka Sharma will soon be seen in the role of cricketer Jhulan Goswami in Chakda Xpress. The actress, in an earlier interview, had revealed that she takes tips from hubby Virat Kohli to understand and learn the tricks of cricket. Directed by Prosit Roy, the release date of the film is yet to be locked.

Also Read: Anushka Sharma shares beautiful pictures of her on-set “vibe” while getting her make-up done