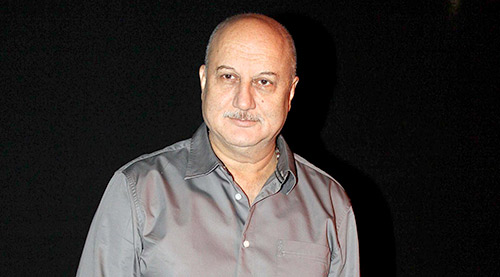 More than a decade after it was staged first, I got an opportunity to watch Kucch Bhi Ho Sakta Hai. As is a known fact, this is a mono play by Anupam Kher as he goes through an autobiographical account of his life and times in a couple of hours. While a lot has been said and heard about this Feroze Khan directed play (which is written by Ashok Patole), gaining a firsthand experience is something that was in my bucket list. Well, it was indeed an evening worth spent as to witness Anupam Kher - the man who has been seen on the big screen in 400 odd films - in flesh and blood on stage was a different feeling altogether.

Even as audience continued to trickle in, sound and light tests were on and one waited for the play to begin for at least 30 minutes, all was well once Anupam Kher took the stage. Well, what he did right at the very onset to walk over to the audience across the really large auditorium. He shook hands, interacted with kids and elders alike, cracked jokes, made everyone (including himself) comfortable, threw in a few anecdotes and ensures that for a good 15 minutes, audience got to see the real Anupam Kher - the man who has been a regular on the big screen for more than 30 years since Saaransh (1984).

As the lights went dim, I was under a strong impression that this would turn out to be a serious, somber account of all that has happened in Anupam Kher's life during last 60 years. However, it was surprising to see him bringing on different shades to his performance right through, most of it being driven by humor. It was delightful to see Anupam Kher bring in his characteristic sense of humor as he brought in claps for each and every episode from his life. For someone like me who has loved his comic style in films like Hum, Ram Lakhan, Shola Aur Shabnam, Khel, Lamhe and more, this one was indeed an experience.

To narrate a tale of a lifetime in two hours flat while still conveying something meaningful isn't an easy task. However, this is where the team of Anupam Kher, Ashok Patole and Feroze Khan deserve a pat on the backs as the proceedings are thoroughly interesting with good dialogues and scene narration. Told as a first person account, Anupam Kher takes audience through his growing up years, his first love, the second, and then the third while also talking about his academic underperformance. If he talks about his glories in drama related academics, he also doesn't feel shy about narrating many failures in his tryst with acting.

An autobiography can be only as honest as the subject in question. That's the thumb rule after all. In that aspect, Anupam Kher ensured that his grey shades were as much on display as the many whites he brings on stage. While one has heard of his argument with Mahesh Bhatt during the casting of Saaransh, it is interesting to know how he threw many starry tantrums in years that followed. His interaction with Amitabh Bachchan and then Dileep Kumar are further interesting. Meanwhile, the manner in which he described his illusions of being a star and then numerous business failures make you look at it all wide eyed.

For all the charm that Anupam Kher brought on screen, I wondered if there was indeed a need for two elements one - a) the language bit and b) the description of rape in Hindi films. In a particular anecdote from his school times, I guess he got a bit carried away with the language of his drama teacher and Principal. Agreed that abuses are a part of the society. However, to say that all on stage in an otherwise neat family event was a bit of a surprise. Also, beyond a bit, you do cringe with the manner in which he demonstrates on-screen stage. Guess after the point had been conveyed, brakes could well had been applied.

Past is not forgotten

It was particularly admirable to see the manner in which he referenced his childhood school friend Vijay Sehgal a dozen odd times right through the play. While industry people like Satish Kaushik, Anil Kapoor, Sooraj Barjatya, Khans and more did get an honorable mention (and so did his friend turned wife Kirron Kher), it was wonderful to know how it was Vijay whom he has turned to in last 50 years whenever in need of emotional support and guidance. The cherry on the cake was the presence of not just Vijay Seghal but also the actor's mother in the crowd who were introduced later by Anupam Kher.

Kucch Bhi Ho Sakta Hai - Anything is possible! Now that's the core which Anupam Kher wanted to bring on screen for the audience as he narrated the many twists and turns that he has seen in his life, including coming back full circle. Though one does wish that he would have also chronicled his 'back to success' story after seeing a professional debacle (Om Jai Jagadish), perhaps he is saving it all for another day. Meanwhile, in terms of working hard, keeping your fingers crossed and believing in destiny - just about everything is touched upon by Anupam Kher in a fun manner, which makes the play highly recommended.