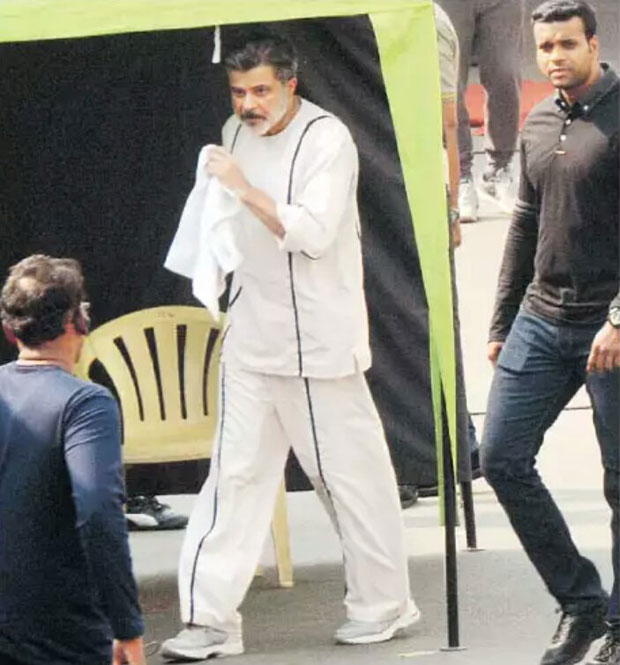 While he was spotted shooting for Fanney Khan on the streets of Mumbai of late, Anil Kapoor was once again snapped in the city, albeit in a completely different avatar. The actor, who recently joined the rest of the team for the shoot of Race 3, was snapped in one of his looks from the film as he was shooting for it at a popular studio.

What gained attention in terms of this picture, was not just his salt-pepper look in the film but also the fact that he is seen sporting prison clothes in this particular shot. However, the details of the said shot or the look are still being kept under wraps. The said picture was taken whilst the cast was wrapping up a major schedule of the film at Film City in Goregaon, Mumbai with picture also grabbing a lot of attention on social media.

Although the details of Race 3 are being maintained under wraps, it is observed that the third instalment of this action packed Taurani production has many alterations compared to its last two instalments. From director duo Abbas Mustan handing over the franchise to choreographer turned filmmaker Remo D’Souza to Salman Khan replacing Saif Ali Khan as the protagonist in the film, the franchise has undergone several variations.

However, Anil Kapoor is the only cast member who has remained constant in the Race franchise. He played the role of Inspector Robert D’Cousta in the past two instalments but we are unsure of his role in the forthcoming film. Jacqueline Fernandez, who plays the leading lady of Race 3, was a part of the second instalment too where she played the love interest of John Abraham.

As for the rest of the cast members, Race 3 also stars Bobby Deol, Saqib Saleem and Daisy Shah in prominent roles and is slated to release on June 5 this year.