Earlier this week, Ajay Devgn's father Veeru Devgan bid adieu to the world. Many industry folks paid tribute to the accomplished stunt director who was a part of several iconic films. Amitabh Bachchan paid a tribute to veteran action director Veeru Devgan who passed away on May 27 in Mumbai. Bachchan, in a special blog post, remembered their first meeting and how his sudden demise came as a shock. 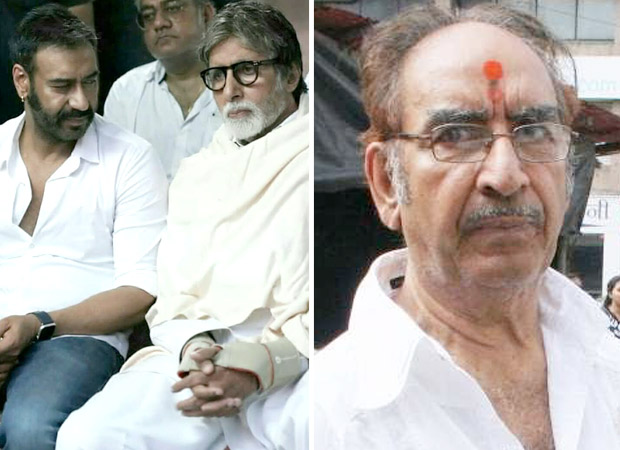 Talking about their first meeting, Amitabh Bachchan wrote, "I saw him for the first time on the sands of Pochina, a small village in the Rajasthan desert, a 2 hour wild drive from the city of Jaisalmer, where I had just arrived along with some of the other members of the film on shoot , my second film ‘Reshma aur Shera’ .."

"The legendary Action Master and Director, Khanna Saheb was conducting a dummy rehearsal for the scenario which involved Sunil Dutt Saheb the leading man of the film, being beaten up by the negative character of the village .. and he was demonstrating the action on a stand in for the leading man .."

He further wrote, "The negative character was beating the leading man with a thin whip like stick, and the leading man was taking it all in and not retaliating .. Khanna Saheb was using a stand in for the leading man and was renowned for his authenticity when conducting stunts .. he was lashing the stand in, whip like and with each lash I could see the pain and agony on the stand ins face, but he continued to complete the scene dummy rehearsal, to perfection ..The stand in getting the lashing was Veeru Devgan."

Then, Amitabh Bachchan wrote about the morning he got the news about his passing. "Veeru Devgan .. action director and co ordinator extraordinaire .. who from those humble beginnings as a stand in stuntman, went on to become one of the most prominent Action Directors of the film industry .. who brought in innovative action sequences and executed them to perfection .. who created job opportunities for innumerable stuntmen to work with him in his action team – many of whom in the years to come became independent action directors and Producers of film ; Veeru ji himself maturing on to becoming a Producer Director .. and most importantly raised, groomed and gave to the industry, another fine talent – Ajay Devgan , his son !

Veeru ji and I came close .. we worked together in most of my films where he did the action .. his team was one happy lot, ever smiling ever helpful ever servile to their master ..

Veeru ji himself was a learner each day .. no matter what the circumstances he was always keen to learn camera positions, operations, lenses ; at times knowing more about them than the DOP themselves .. and ever keen to operate the camera himself ..

He took in his roots from Punjab with earnest and dedication .. and knowing my antecedents , would on my arrival on set greet me with ..

A gentle caring human .. ready to help another in any situation .. warm, receptive .. and proud of his progeny Ajay who he used to bring along on set often when he was a kid ..

He had been ailing, but within control .. his death came as a sudden shock on the sets of Chehre .. I stopped work, made an announcement held a minutes silence to honour him and continued work .. he would have wanted it that way .. !

After the work was over I went to the cremation .. … time and moments flash by .. occasions when there was work interspaced with the laughter and humour that Veeru ji and his team invented .. teasing a fellow stuntman .. urging one of them to go for a rather difficult stunt .. coaxing me with confident goading of high cheer to do it, because he felt it could be done by me .. such times go by and never return .. and the memories are fresh as yesterday ..

You sit in front of the burning pyre .. and wait for the dust of the ash to be collected .. and the visuals of the dear ones gone by, flash .. Babuji , Maaji … and tomorrow is another day .. and another work."

Along with the post, Amitabh Bachchan shared two pictures from the funeral in which he is seen giving a hug to Ajay Devgn and they sat together during the last rites of Veeru Devgan which was conducted on May 27 evening.

On the work front, Amitabh Bachchan is currently shooting for thriller Chehre.