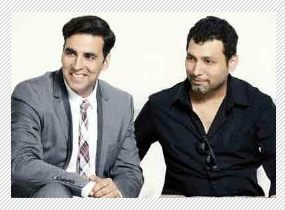 His last film released just 4 weeks back and his next is less than 40 days away. However, Akshay Kumar is adopting an altogether different strategy when it comes to their promotion. While for Khiladi 786 he went all around the town with his song-n-dance routine as well as numerous city tours, when it comes to Special 26, there is something 'special' which is already on the anvil, which would be unique.

"For starters, Special 26 isn't one of those 'masala' films like Khiladi 786, Rowdy Rathore or Housefull 2. It has to be promoted differently and hence the entire pitch would have a different flavour to it. Just like OMG Oh My God where the entire focus was on content, even Special 26 would have its very subject as its USP. That is something which is visible in the promos as well and since it is a plot driven film, Akshay as well as director Neeraj Pandey have devised ways to reach out to the audience", says a source.

These plans would are all set to be executed, now that the New Year revelry has settled down and it is back to business for Bollywood.

"A beginning has already been made in the way the whole campaign has been designed. Right from the posters to the theatrical promo, the look and feel of the movie is different. Since it is a heist drama, you can't expect Akshay to be singing, dancing or performing those dare devilry stunts. This is the reason why none of these elements are kept on the forefront. Focus is on the treatment factor here", an insider adds.

The film is a real story about those fake CBI raids that had shocked the nation during the early 80s. So will there be any mock raids conducted by those associated with the film, all in good humour though?

"Well, that would be a little too farfetched", the source smiles, "However you would definitely hear and see things that are quite different from the routine. Akshay has taken a different trip with the film and with Neeraj returning after A Wednesday, both of them want it to be 'special'. Pun intended."