Last Updated 25.10.2021 | 10:00 PM IST
feedback language
follow us on
Bollywood Hungama » News » Bollywood Features News » Akshay Kumar shared an exclusive still from Housefull 4 and it has a major GoT reference!

Akshay Kumar has quite a handful of films coming his way this year and in the next one. One of them is Housefull 4, the fourth instalment of the namesake franchise that has always left people rolling in laughter. This time the cast is bigger, and better as this multi-starrer has a lot of elements from other movies. Now, we feel that with the latest picture shared by Akki, it might have a Game of Thrones reference too. 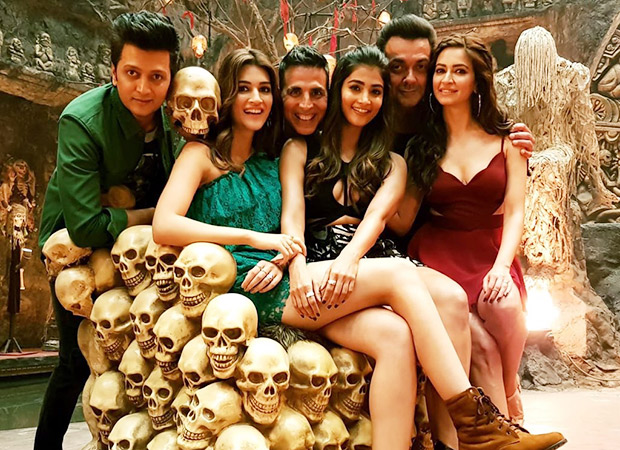 Akshay Kumar recently shared a picture on his Twitter where Kriti Sanon, Pooja Hegde, and Kriti Kharbanda are sitting on a throne made out of skulls, while Akshay Kumar, Riteish Deshmukh, and Bobby Deol are posing at the back. Akshay captioned the picture as, “HouseFull of Thrones ☠ Who Lives, Who Dies...Only  the Script Decides ???? #Housefull4 @Riteishd @kritisanon @hegdepooja @thedeol @kriti_official @NGEMovies @foxstarhindi” The movie was in the news apart from its announcement when the former director of the film, Sajid Khan, was replaced by Farhad Samji over night after the Me Too allegations.

The movie will have Akshay Kumar play the role of a 16th century ruler and now we’re guessing if we will have a solid Game Of Thrones’ spoof as well. There are also confirmed reports that Nawazuddin Siddiqui will be a part of the film and will have a surprise element.