Akshay Kumar is known for performing in some of the biggest chartbusters in the 90s and some of the tracks are popular even today. Amongst them is the song ‘Main Khiladi Tu Anari’ from the film by the same name. The fun dance number featured Akshay with Saif Ali Khan wherein the two of them are seen dancing their hearts out in a bar. Now, 18 years later, the song will be recreated yet again and it will not be with Saif. It will be with Emraan Hashmi for their upcoming comedy Selfiee. 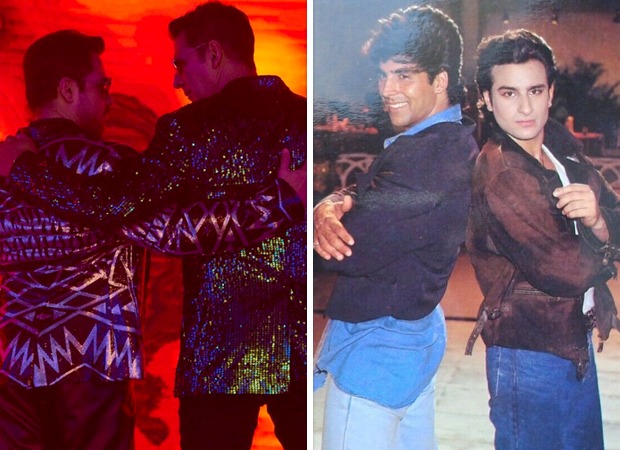 Emraan Hashmi took to Instagram to share a photo of him and Akshay Kumar from the sets of Selfiee as they geared up to recreate the song ‘Main Khiladi Tu Anari’. While the original song featured Akshay and Saif in their disheveled shirts, jackets and casual denims as they dance enthusiastically to the beats of the peppy number, this one will feature the actors in blingy avatars.

Akshay and Emraan are seen sporting all black outfits along with a lot of bling in their jackets. In the caption posted by Emraan, the actor revealed that he also had a fun dance off with the Sooryavanshi actor, adding that he hasn’t stopped pampering his feet since then. He said, “28 years after the original .. The OG khiladi with the new Anari. This stare down led to a dance off. And what a dance off it was . (Haven’t stopped icing my feet ever since) #selfiee.”

Speaking about Selfiee, the film will bring together Emraan Hashmi and Akshay Kumar for the first time. The film will also star Nusshrat Bharucha and Diana Penty as leading ladies and is directed by Jugjugg Jeeyo filmmaker Raj Mehta. It is produced by Dharma Productions and is expected to hit the big screens on February 24, 2023.