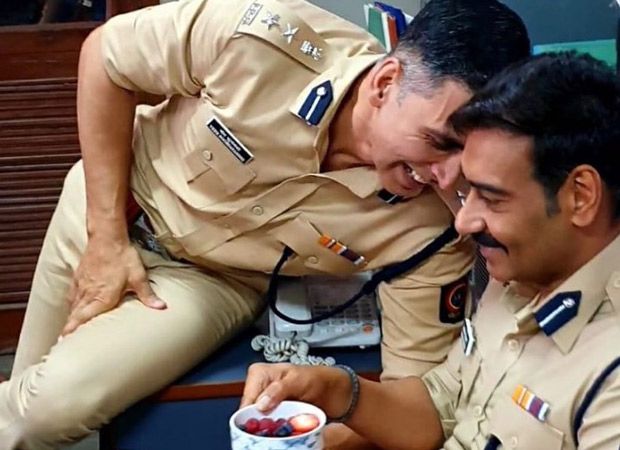 Three decades ago, Ajay Devgn entered the world of movies riding on top of two motorcycles. Since then Ajay Devgn has not looked back. Phool Aur Kaante, featuring the actor released today thirty years ago. His debut film, Phool aur Kante was largely popular among the audience during the 90s.

In the same year, Akshay Kumar made his debut in the film Saugandh and since then both the actors have shared a great bond.

Congratulating the actor on completing 30 years in the film industry, The Khiladi star took to Instagram to share a behind-the-scene picture from their latest release Sooryavanshi and wrote, “Mujhe yaad hai when as newbies, main aur tu saath saath Juhu beach pe martial arts practice karte the when your dad used to train us. Kya din the yaar @ajaydevgn, and just like that it’s been 30 years to #PhoolAurKaante. Time flies, friendship stays!"

The two actors are close friends and also one of the successful stars of Bollywood today. Before Sooryavanshi, we have seen their duo in Suhag, Khakee, and Insan. Some of the movies were major flops while a few were blockbusters but their ‘Jodi’ has always managed to entertain the audience. Their accord and the banter in the film is something that the audience has been loving. The Jodi was recently seen in Sooryavanshi as Akshay joined the cop universe of Rohit Shetty after Ranveer Singh and Ajay Devgn.

Bollywood megastar Amitabh Bachchan also showered love on his ‘May Day’ co-star Ajay for completing an illustrious journey of three long decades in the industry. Big B tweeted, “#AjayDevgn, completes 30 years in the Film Industry, on 22nd Nov, when his film ‘Phool aur Kante’ released. Soft spoken, non interfering, yet filled with passion. My congratulations Ajay, may you continue for another 70."

T 4103 - #AjayDevgn , completes 30 years in the Film Industry , on 22nd Nov , when his film 'Phool aur Kante' released. Soft spoken, non interfering, yet filled with passion. My congratulations Ajay, may you continue for another 70. ????????

Ajay Devgn and Amitabh Bachchan are all set to reunite for ‘Mayday’, which stars the former in the role of a pilot, while details of Big B’s character have been kept under wraps. This film also marks Ajay’s return to direction.

Also Read: Akshay Kumar gets emotional as he misses his late mother