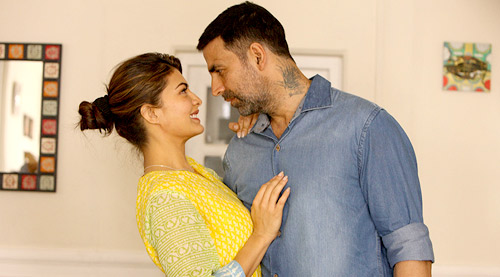 
She recently confessed she was on the verge of shutting shop in Bollywood and going back to Sri Lanka when Salman Khan and Kick happened to Jacqueline's career.


Now her career is on a roll. She had a cameo in last week's Bangistan. This week she plays Akshay Kumar's wife in Brothers.


Akshay who first shared screen space with Jacqueline in Housefull 2 is all praise for his 'Jacks' , the nickname he given to his perky pretty co-star.


Says Akshay, "Jacks is the bubbliest bunch of beans you could ever meet in a heroine. She makes life and shooting so easy for everyone. I think her performance and expressions in Brothers literally fill your heart."


Apparently Jacqueline was not convinced whether it'd be a right career move to play a wife and mother in Brothers.


Her mentor Salman Khan convinced her.


Says Akshay appreciatively. " She's become so comfortable in her own skin now, especially in a film where they have dressed her down, not allowed make-up, basically stripped her of her glamour and made a mother out of her. She's amazing in this role, and I genuinely can't wait to work with her again on Housefull 3."