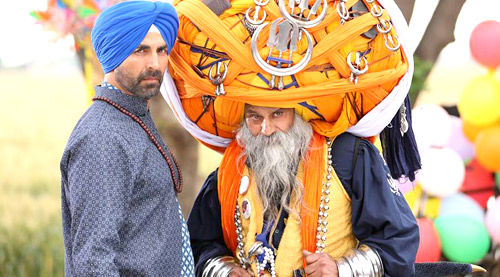 After some good hype and buzz that was created for 'Tung Tung Baaje', the flagship number of Akshay Kumar's next film Singh Is Bliing, the song was finally

unveiled last afternoon. After watching it a few times, the message is loud and clear - whether it is the film, its music or its lead actor, none of it is loud and in-your-face. In fact it is not

'bling' either, something that was perceived when the film's title was announced around a year back. Instead, the bling factor is in the act i.e. the large heartedness of it all, which is the core

of this feel good light hearted entertainer that has Prabhu Dheva at the helm of affairs.

"When the title was announced, the first impression was a shiny saga in the offering that would have eye melting colors floating from all directions with loud music, overtones and characteristics

in motion. Considering the fact that Akshay Kumar can pretty much carry it off as well, there wasn't much doubt around him donning this avtar. Moreover, with Prabhu Dheva calling the shots, it

actually seemed like a definite possibility. However, the very first song, 'Tung Tung Baaje' has surprised one and all. Suddenly, the film looks entirely different from what one expected it

to be," says an observer.

For starters, this composition by Shena Khanwalkar (who is also the lyricist here) is as rustic, ethnic and desi as it gets, something that gives it an edge over other Punjabi numbers that arrive

at a regular frequency. Moreover, Diljit Dosanjh (who has recently given a Blockbuster Sardaarji and would be seen opposite Kareena Kapoor as an actor in Udta Punjab) is in his

complete elements as a singer, which is going extremely well with Akshay Kumar's characterization.

"However, most importantly it is Akshay Kumar himself who is clearly enjoying the show," a filmmaker quips, "Just look at him; he looks as fresh as ever. Dil khol ke dance kar raha hai, acting kar

pretty much the case with 'Tung Tung' as well. He looks like someone who has made the entire village his own, hence getting into the milieu of Singh Is Bling."

While there are glowing words already coming in, one waits to see how a larger audience reacts when they see Akshay Kumar in action on the big screen, since 'Tung Tung' is being attached to

the big release of the month, Brothers.