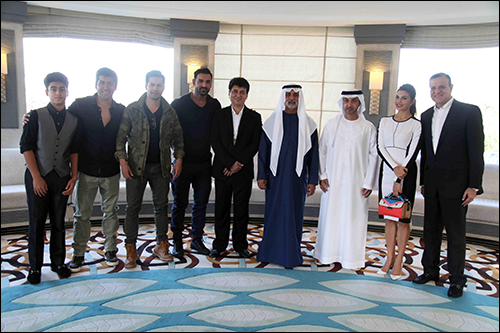 Recently, we reported about Nargis Fakhri and Saqib Saleem joining the cast and crew of Dishoom who are currently shooting for the film in Abu Dhabi. And now, the team of the film was seen to be interacting with one of the prominent members of UAE.

On January 27, HH Sheikh Nahyan bin Mubarak Al Nahyan invited the team of Dishoom to his palace in Abu Dhabi. Along with the leading cast of the film Varun Dhawan, John Abraham, Jacqueline Fernandez, the director Rohit Dhawan and producer Sajid Nadiadwala too accepted the invitation and decided to visit HH Sheikh Nahyan followed by a luncheon. We hear that they had a lot of conversations about India and Abh Dhabi and cinema on the whole. Dishoom team will be shooting for about 40 days at local and iconic locations of the UAE capital and HH Sheikh Nahyan was more than generous to extend all the support he could for the team to have a smooth schedule there.