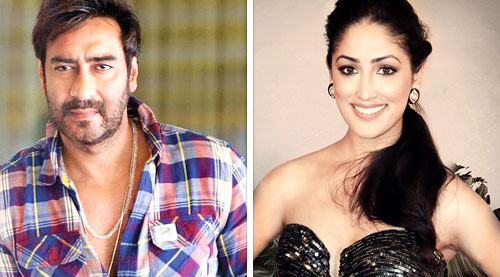 She started off quite well with Vicky Donor, though not many saw her act in Total Siyappa that went unnoticed. Now that she has hit the big league with Action Jackson, which has Ajay Devgn as her leading man, Yami Gautam has a lot to look forward to in weeks to come. Meanwhile, she has an eventful year in the making, what with Badlapur (Varun Dhawan) and Junooniyat (Pulkit Samrat) marking an entry for her in the thriller and romantic space respectively.

We get into an exclusive chat with the young woman whose radiance strikes the quickest from the word Go!

With Action Jackson being your first out and out commercial film, you must be happy to find some all around visibility across various centers in the country.
You know, the kind of massive visibility that the film promises, I realized it during the trailer launch itself. The response from media and audience was so huge. As a matter of fact I saw the promo for the first time with them and loved the manner in which Prabhu Dheva brought together action, romance, drama and family masala, all in one film. I think this is what I was looking for and with the film I am realizing what level it can go.

You had to wait for a while though for Action Jackson to hit the screens, considering the fact that the makers were earlier looking at releasing the film in first half of the year.
Of course, I won't deny that there is a bit of anxiety that sets in. When you start a film, you are in a groove and want to wrap up it up all in certain timeframe. However, things changed but that's fine because I was kept informed all throughout. It was a deliberate decision from the producers (Sunil Lulla, Gordhan Tanwani). Having said that, at the end of the day it all happens for a good reason. We had the biggest trailer launch that we could think as we came on Diwali with Happy New Year. Shaayad pehle itna samajh nahi aaya tha par ab lagta hai that it was all for the best.

For you as an actor, how much of a change has it been to move from a realistic to hardcore commercial set up?
I think it is nothing to do with realistic or commercial cinema; it is about the thought process of a person to person. Everyone has her own temperament and a way to go ahead in her career. I thoroughly enjoyed being a part of Action Jackson.

Names like Prabhu Dheva and Ajay Devgn would have made a lot of difference too, isn't it?
Of course. When I signed the movie, my first and foremost reason to do so was because I have loved Prabhu Dheva films. I have been a fan of him since his 'Urvashi' [Humse Hai Muqabla] days. To be with someone like Prabhu Dheva is indeed an altogether different ballgame. He is very spontaneous. As an actor, it took me a little bit of time, not as much to adjust but to understand what he expected from me. Once I managed that, it was a matter of adapting to his world.

Was it any different from the directors you have worked before?
Well yes, it was different for sure. My Vicky Donor director Shoojit (Sircar) sir is very-very planned. He does his homework and his workshops are well in place. On the other hand E. Niwas (Total Siyappa) again knows what is happening for the day; just about everything is well set. When it comes to Prabhu sir though, he believes in taking a lot of spontaneous decisions. He also expects a lot of improvisation from you.

Did you have to go through any ice breaking moments with Ajay though?
Not really, there was nothing like an ice breaking moment per se. He is someone who is very professional, comes on time, does his work and leaves. No wonder, he is one of the biggest stars of the country. People like him have reached where they are due to these very virtues. You can't get such combination and platform for a film. No ways I would have turned down Action Jackson.

In the film, you have Sonakshi Sinha as your co-star. Since this is your first Bollywood film where you are sharing screen space with another leading lady, how did that experience play out for you?
As a matter of fact Sonakshi and I don't have many scenes together. We hardly shot together. As a person, she is one of the coolest actresses that I have met. She is very jovial and sweet. We had a great time working with each other.