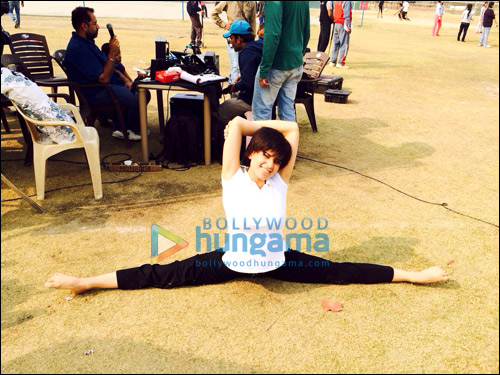 After the end of a long legal controversy, Anand L. Rai's sequel to Tanu Weds Manu finally has gone on floor in Delhi, a few days ago. Retaining the lead cast, the second installment is a continuation of the prequel and as we have earlier reported, Kangna Ranaut will play a double role.

The tough part for the actress, however, is to not get in the form of the vivacious, bindass and fun loving Tanu but to get into the shoes of a Haryanvi athlete. Kangna will be seen in a tom boy avatar and will be nicknamed Datto. Datto aka Kusum Sangwan, belongs to Jhajjar district who gets an admission in the reputed Delhi University through sports quota. She is a state level sprinter and jumper and will be seen doing a lot of athletic work in the film.

Recently, we had given a glimpse of the actresses' avatar and even the film's male lead Madhavan's look in the film. And now, we got hold of yet another picture of the actress in the athlete avatar in a warming up session on the sets of the film. The actress was seen doing the famous 'leg split' in order to train herself well in the sport.

Tanu Weds Manu 2 is said to be a love triangle and it will explore the intricacies of marital relationships. The film also stars Jimmy Shergill and Deepak Dobriyal with South superstar Dhanush in a cameo. It will be extensively shot in North India.