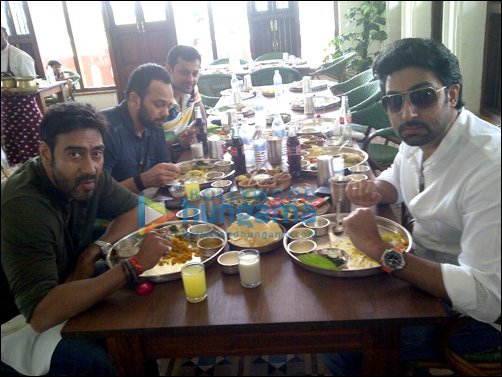 Abhishek Bachchan, who is very fond of Gujarati thali, took his Bol Bachchan team to one of the oldest (almost 150 years) and most famous thali restaurant 'Agashiye' in Ahmedabad.

With the Bol Bachchan inching towards release, the team of Rohit Shetty's comic caper is traveling all over the country for their promotional activities. In between all the interviews and media interactions, the team took a little time off yesterday and made a quick visit to Agashiye on Abhishek's insistence.

Abhishek took the entire team including Ajay Devgn, director Rohit Shetty and producer Dhaval Jatania to sample the delicious Gujarati spread in the quaint little restaurant. Said a source present there, "Agashiye Thaal as it is called, is one of the most grand and delicious cuisine to eat in Ahmedabad. AB Jr happily binged on his favourite Moong Daal ka Halwa at the restaurant!"

In fact, Rohit enjoyed the meal so much that he was heard saying that he will make it a point to come here, whenever he visits Ahmedabad. And it didn't end here! They gave a perfect finish to their hearty meal with some special paan and chaas which is known to be one of the best that you can get in the city!

Bol Bachchan presented by Fox Star Studios and produced by Shree Ashtavinayak Cinevision along with Ajay Devgn Films is slated for release on 6th July.