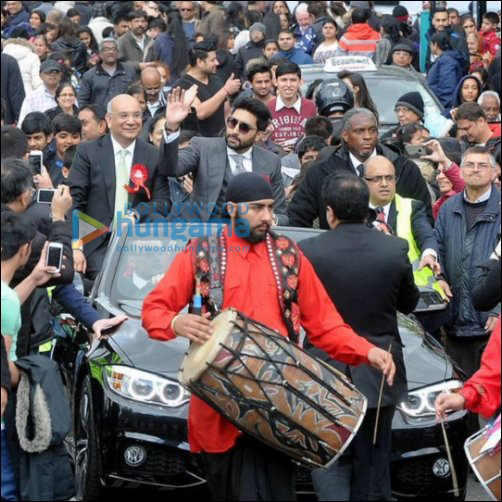 If you thought that Abhishek Bachchan has been missing since the last few days, then the news is that he had been to Leicester (UK) in order to support Indian-origin Member of Parliament (MP) Keith Vaz's election campaign. For the uninitiated, Vaz happens to be officially nominated as the local Labour Party candidate for the upcoming polls in the UK.


Abhishek Bachchan even participated in a Q & A session with Vaz and around 350 residents of Leicester at the Peepul Centre. While he spoke about his life and career, he was also presented with a personalized Leicester City football shirt. Post that, Vaz and he went on a tour of Belgrave Road and Uppingham Road, where they were greeted by multitudes of fans.


Speaking about his visit, Abhishek Bachchan said that he had gone there for his close friend Keith Vaz who possessed many values that he held close to his heart for the politicians. He added that Vaz was warm, generous and kind. On the other hand, speaking about Abhishek, Keith Vaz said that their city was bouncing with the joy of the people who had come out to see Abhishek. He added that, Abhishek Bachchan was really wonderful and that people truly adored him. He even (jokingly) told Abhishek, that he should not stand to be the Member of Parliament for Leicester East, else he (Vaz) would not have a chance.