On 4th August 2019, Kashi Vidyapith, a historical Institution strengthening Indian teaching since pre-Independence Era, honoured the much celebrated nationalist filmmaker Aazaad for his immense contribution for the upliftment and progress of our forgotten language Sanskrit and intense cultural artistic service to the motherland. 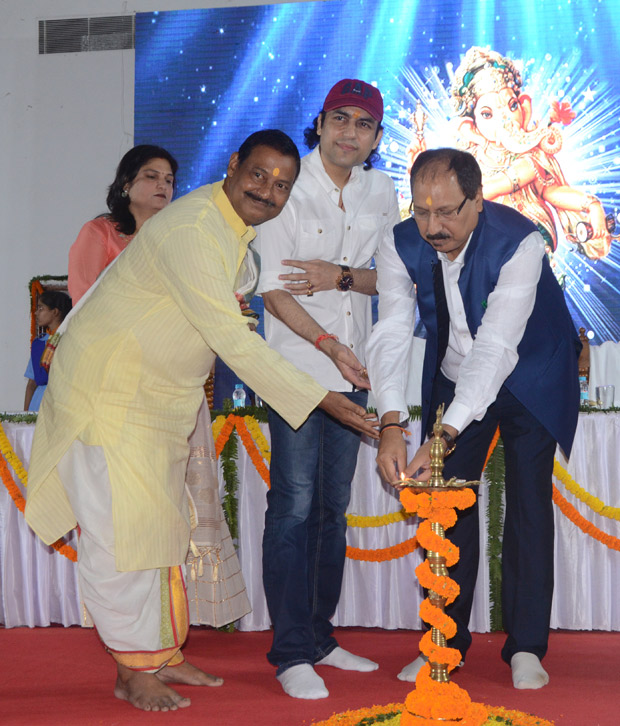 In this auspicious grand event, Aazaad was praised for the successful premiere of his film Rashtraputra at prestigious International Cannes Film Festival and his creative contribution in Sanskrit with the first mainstream feature film of the world Aham Brahmasmi. The ceremony was followed by trailer and song launch of the film Aham Brahmasmi.

The film is written and directed by military school alumnus and the international filmmaker Aazaad to glorify the forgotten language Sanskrit. Aazaad is now coming with his unique creation of Sanskrit film Aham Brahmasmi to acquaint the comprehensive audience with the very roots of our ancient culture, traditions and forgotten language Sanskrit. It is important to note that both the films are produced by the film company ‘The Bombay Talkies Studios’ which was established by Rajnarayan Dube in 1934 along with female producer Kamini Dube. 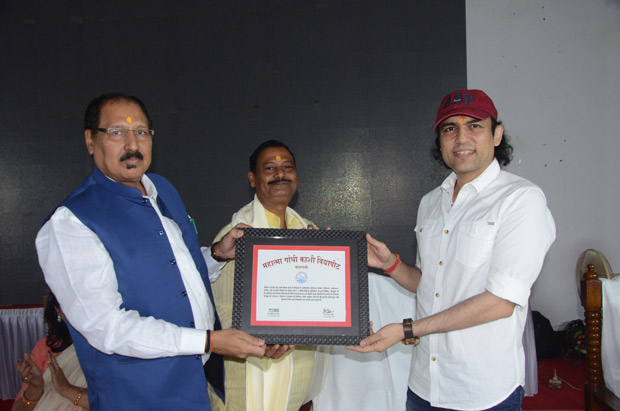 Aazaad quoted with his trademark confidence that each and every human being, young or old, male or female, citizens of any country, any region and religion must have the thought and respect for their respective country. He also said that, this is the high time to re-invent and restore the sanatan culture and values through Dev Bhasha Sanskrit to preserve our divine identity and existence. Aazaad roars in his baritone that India is not merely a piece of land but a divine entity; one should live and die for the motherland. We are the fortunate descendants of the great sages who had created Vedas, Upanishads and the ultimate wisdom. For us the whole world is our family. Our thoughts, actions and voices represent and strengthen the worldwide brotherhood, piece and wisdom. It is a matter of great hope that in this commercial world of movies, Aazaad has come forward with such an extra ordinary subject of all time i.e Aham Brahmasmi. He expressed his deep concerns for cultural nationalism and said “Today in this sanatan Bharat, the sanatanis are in a state of becoming endangered species. The soulless, shameless, the permanent slave community, the anti-sanatani brigade has waged war against the sanatanis and are trying to prove and title them as communal. This country, the country of sanatanis should be free from the invisible chains of slavery created by so called seculars and pseudo intellectuals...And announce and declare in loud and clear voice that we are free …we all are Aazaad…we, the offspring of the sages”.

In this very occasion Prof. T.N Singh, the Hon’ble Vice Chancellor– Mahatma Gandhi Kashi Vidyapith, Varanasi expressed his deep regards for nationalist filmmaker Aazaad that Aazaad is not merely a filmmaker but an institution of substance himself. The Vice Chancellor said that Aazaad is combination of several highly creative departments of intense filmmaking. He himself a writer, a director, an editor, a music director, a singer and a multi-faceted complete actor. Apart from all these qualities he is a self-employed crusader of traditions and culture of the great nation i.e Bharat. He is very much aware of the fact that he has the responsibility to counter all the odds with his tremendous nationalistic force so that the purity and dignity of this godly culture of the land of sages can prevail. In his presidential speech the Vice Chancellor thanked the whole team of Bombay Talkies, Aazaad and his associates for the great creative, cultural achievements. He added that inside all of us there is the Brahm and we have to recognize and activate the supreme power. We will not only watch the great film Aham Brahmasmi but we will publicize it and tell the other institution to see and enjoy the film, the language and the creation. It should be mandatory to exhibit and to be watched in all the educational institutions. After watching the movie one can understand the eternal pain in the heart of Aazaad. 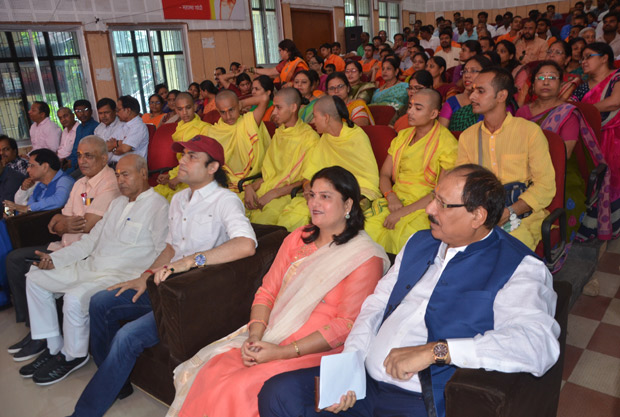 In this very occasion the head of the writing department of legendary film company Bombay Talkies, writer-poet and the closest associate of filmmaker Aazaad, Abhijit Ghatwari described Aazaad as the creative genius and a devoted inspiring artiste, a deep rooted creative soul who has the capability to take the Bombay Talkies to its glorious climax. Aazaad has fulfilled his responsibilities by his god gifted creative talent. After acquaint with the oratory skills and performance of Abhijit Ghatwari the Vice Chancellor Prof. T.N Singh – Mahatma Gandhi Kashi Vidyapith, Varanasi told the audience that Abhijit Ghatwari is not just the writer and head of writing department but he is like a well - trained, well-cultured scholar and professor of Hindi and Sanskrit who can perform nonstop and very much ease with poetry and prose. He also added that if this type of talent is associated with Bombay Talkies then one can imagine how authentic and intense the film Aham Brahmasmi will be.

In this great event Chief Guest Ex. Hon’ble Vice Chancellor Prof. Gangadhar Panda – Shree Jagannath Sanskrit Vishvavidyalaya, Odisha expressed his deep rooted feelings for the language of Gods Sanskrit, As the re-establishment of Sanskrit is only possible when the students of Science and the people of Scientific mind-set acknowledge, understand, preach, practice and honour the ancient language Sanskrit. He said that Aham Brahmasmi is the ultimate essence of our spiritual Shashtras. Aham Brahmasmi is the ultimate and purest form of existential experience achieved by our divine ancestors.

In this rarest of the rare joint event of film and Sanskrit, the Hon’ble guests recollects the rare fact of the history of Bombay Talkies having a great legacy of meaningful, socially relevant and reformative creative experiments through cinema.  The iconic film company was the great temple of creative cinematic art and culture established by the cinematic giant Rajnarayan Dube in 1934. All the stars of yesterday or today were connected in any form and fraternity with the very roots of Bombay Talkies. Name any and you will find their connection with the legendary pillar of Indian Cinema i.e Bombay Talkies. 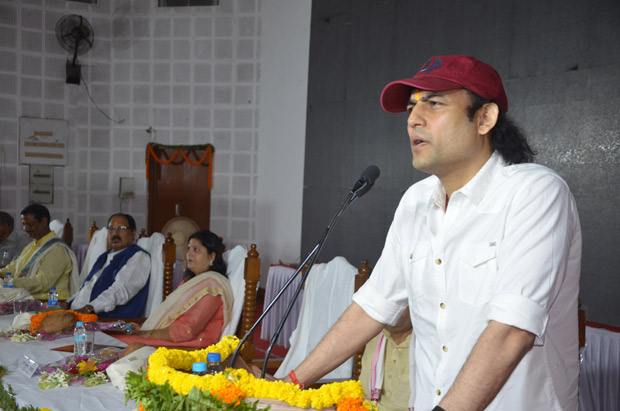 It is to be noted that after an interval of sixty-five years the legendary film company Bombay Talkies made a splendid comeback with nationalistic film Rashtraputra and created history. Now the premiere company of filmmaking is ready to release the world’s first mainstream feature and most anticipated Sanskrit film, Aham Brahmasmi.

The unique film based on the thoughts and philosophy of the great revolutionary Chandrashekhar Azad. The sole purpose and aim of this film is to reunite the world through a sense of unity and diversity and to acquaint the world with our immortal, eternal, cultural heritage through the forgotten ancient language Sanskrit. The movie has all the key elements of mainstream cinema viz. patriotism & drama in its core. The motto behind making the film is to make Sanskrit language relevant even for today and to leave the mark on people to rejuvenate the long lost language.

Aazaad recollected his experience during the creation of the film Aham Brahmasmi in Dev Bhasha Sanskrit that he was alone with his team but after completing the film and campaigning across the nation his now supported immensely by thousands and thousands of Sanskrit loving descendants of the sages from the streets, from the schools, colleges, towns and villages, from different sects and societies, males, females, young and old. Aazaad is visualizing the event with his futuristic vision that very soon the day will come when lacs and crores, millions and billions of nationalist people coming with saffron flags, sloganeering ‘Vande Mataram’ and communicating with each other in Sanskrit. Sanskrit will be the language of communication for the common people very soon. 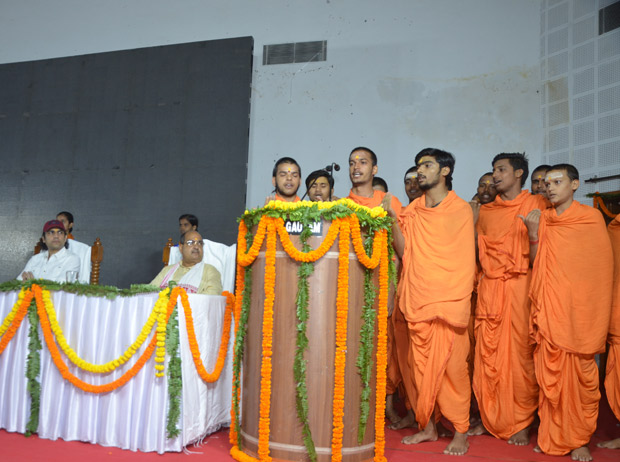