Last Updated 03.08.2020 | 6:30 PM IST
feedback language
follow us on
Home » News » Bollywood Features News » Bollywood News Aamir Khan gets a ‘pleasant surprise’ in Japan and it is none other than South superstar Chiranjeevi

Aamir Khan is currently busy focusing on his next, a remake of the Hollywood film Forrest Gump, titled Lal Singh Chaddha. The superstar actually took off to Japan to work on his film when he had an unexpected encounter. He met none other than South superstar Chiranjeevi when he was at the airport and the actor shared about his own fan moment on social media. 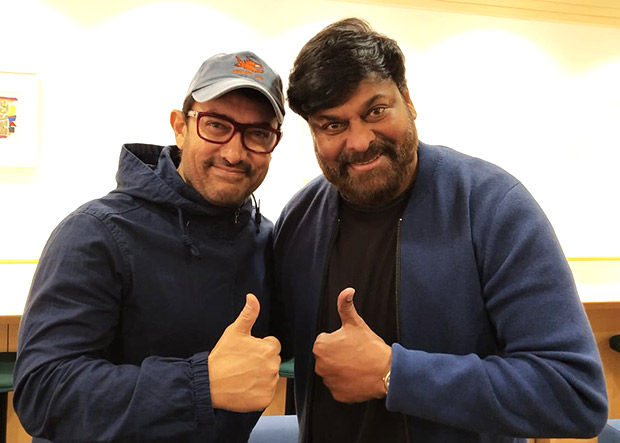 Aamir Khan rarely shares posts on social media but it was quite surprising to see the Bollywood superstar to talk about someone he admires so much and having met him in person. Aamir revealed that South superstar Chiranjeevi garu has been one of his favourites and expressed about how happy he felt on his Twitter handle. He also added that their discussion revolved around Chiranjeevi’s next based on Uyyalwada Narasimha Reddy.

Ran into one of my favourite actors, Superstar Chiranjeevi Garu at Kyoto airport! What a pleasant surprise :-) .
Discussed his new project about freedom fighter Uyyalawada Narasimha Reddy. You are always such an inspiration sir ????.
Love.
a. pic.twitter.com/qpwqo9sRqt

Readers would be aware that Chiranjeevi will next be seen in Sye Raa Narasimha Reddy which is being produced by his son Ram Charan. The film is expected to be made on a grand scale with actors like Nayanthara, Sudeep and even Amitabh Bachchan playing key roles.

On the other hand, Aamir Khan is neck deep into Forrest Gump remake. Lal Singh Chaddha is directed by Secret Superstar filmmaker Advait Chandan. The Academy Award winner Hollywood film revolves around the life of a man who somewhere becomes an inspiration behind the key changes that happened in the historical events that transpired in the 20th Century USA. Produced by Viacom 18 and Aamir Khan Productions, the announcement of the rest of the cast is yet to be made.