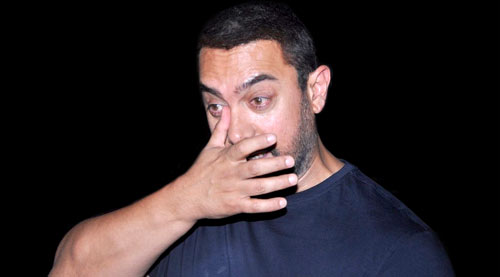 So Aamir Khan cries again after watching Kapoor & Sons! That sentence has probably lost its news value considering this is not the first time the actor has turned emotional

after watching a film. After the film's screening Aamir Khan's quoted "I always cry while watching films", so Kapoor & Sons being an emotional family affair, we weren't surprised to Aamir's

reaction. But what we are trying to guess is the fate of the film? How? Let us explain.


Initially, the picture of a teary eyed Aamir Khan made big news when he walked away with his pink cheeks and nose after a special screening of Salman Khan starrer Bajrangi Bhaijaan. And

remember how Salman Khan and his (piggy back) partner Harshaali Malhotra became the talk of the town after the film managed to become a record-breaking success. Well, that became a trending

phenomenon in Bollywood wherein it was said that Aamir's teary eyes guarantee that the audiences will love the film too.


But then came his nephew Imran Khan's Katti Batti! May be Aamir Khan thought that his tears would save his darling baby Imran's sinking career and he decided to cry on this one too! Well,

the results were anything but like Bajrangi Bhaijaan. In fact, it was the opposite. Even his tears could not save the film and Imran's fate was sealed forever!


And now, Aamir Khan cried again for Kapoor & Sons. Going by the logical point of view, Kapoor & Sons should do well, courtesy the women swooning over Sidharth's hot body and Fawad's

charming looks and some groovy party numbers, not ignoring the fact that the film might boost of a strong storyline. But let's see! What if the Aamir Khan's tears work its magic yet again and the

film turns out to be a smash hit! Well, if it does then maybe we can let go of the Katti Batti miss in his prediction once and for all.


And what about Aamir Khan's tears? Well, as the actor mentioned, it will keep flowing for the future releases!