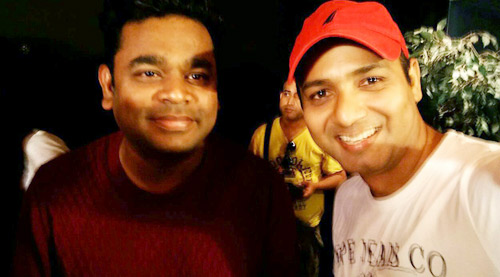 Safarnama khayalon ka, safarnama andhere mein ujalon ka....safarnama. As the last song from Tamasha played during the 'music bethak' yesterday at Sajid Nadiadwala's tastefully done office, I was filled with immense happiness to have been a part of an hour of sheer blissful music and more importantly at being a part of an artistic atmosphere devoid of undue frills. A fatwa had been issued against A R Rahman by a fringe group Raza Academy but Mr. Rahman seemed least perturbed (rightly so) as he smiled through the afternoon. It was a privilege to see the great man talk about his music in his trademark shy, unassuming manner with hints of boyish mischievousness.


In a highly commendable move, the select group of journalists (without the paraphernalia of throbbing cameras jostling around) were made to listen to all the songs from the music album of Tamasha and after each song, the journalists asked questions and Imtiaz, Rahman saab and lyricist Irshad Kamil answered the questions. Singer Mohit Chauhan, who has sung 'Matargashti' was also present. Ranbir Kapoor joined the 'bethak' live from Vienna where he is shooting for Ae Dil Hai Mushkil. He seemed very excited.


Listening to a song is so much better than watching the music videos. The music pieces, the lyrics, the variations tried out by the singers... it is all so much more clear. Before the 'music bethak' started, Imtiaz told his team that he didn't want a Tamasha standee behind where the trio sat as it will look 'cheap'. Hats off to him! There have been times where the marketing teams have over-done the number of 'standees' in promotional events and interviews. Sometimes, subtlety makes a far more prominent statement than too much of in-your-face promotion. Some of the radio jockeys asked really pertinent questions that inspiringly resulted in wonderful answers.


Tamasha is one of the finest albums of A R Rahman for the sheer range and freshness of sound. There is a lot of thought behind each song. Months have gone behind composing, recording and mixing each song. It also happens to be one of the best works of lyricist Irshad Kamil. After this album he deserves to be celebrated as a prized poet in Bollywood. 'Dooriyon Ki Chaadaron Pe Yaadein Taankiye' (Chali Kahani), 'Oley Gire Sulagte Se Sulagte Se' ('Matargashti'), 'Tum Saath Ho Ya Na Ho Kya Fark Hai, Bedard Thi Zindagi, Bedard Hai' (Agar Tum Saath Ho) . There are many such gems.


Rahman spoke about the choice of Alka Yagnik for Agar tum saath ho, a class singer who makes a comeback of sorts with this melodious duet with Arijit Singh. "Alka sang for my film 100 Foot Journey. I thought her voice will suit Agar Tum Saath Ho. When my wife heard the song, she said who's this new young singer?" Rahman said. Lucky Ali has excellently rendered Safarnama. It is a beautiful spiritual journey song. "I was recording with Lucky for Rhea Kapoor's film. It was a matter of convenience actually," Rahman said with a smile. Chali Kahani is a unique idea with brilliant lyrics penned by Kamil and excellently sung by Sukhwinder Singh, nicely complimented by Haricharan and Haripriya. "Sukhwinder has powerful vocals and I felt he'll suit this song perfectly," Rahman said.


When I asked Mohit Chauhan, how much he owes to Rahman for searching for a range in his singing, Mohit expressed his gratefulness to A R and requested that the composer will be a better person to answer it. "I asked Mohit to come out of his comfort zone and in Rockstar I asked him to sing at a pitch higher than what he usually sings," Rahman said. Since music is my passion, I ended up asking more questions than usual. Safarnama has minimalistic music arrangements and is profoundly spiritual. Tu Koi Aur Hai is an outstanding journey song with superb music orchestration, evocatively sung by Rahman himself but it is inherently minimalistic when it comes to use of music instruments. Aye Ajnabi from Dil Se is another song that came to mind with minimum orchestration but mammoth impact. So, does he think that less is more? "Yes. Even in Safarnama we had more instruments but then I removed some. I always want to retain only what is most required but then I also leave it to what the director has in his mind," Rahman said thoughtfully.


There was a three camera set up that has captured the entire conversation that the Tamasha team had with the media yesterday. Whenever it comes out (I hope the full conversation is out) it will be an absolute treat for the music lovers. I also urge producers, directors and music companies that they should give the idea of 'music bethak' a serious thought. It will do a world of good to the promotion of music in the most comprehensive way.