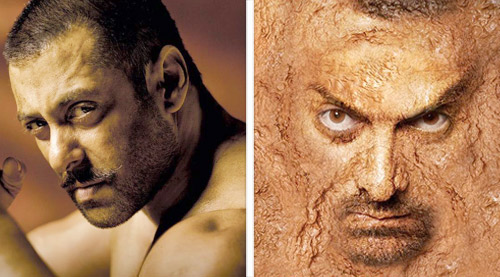 They're both playing wrestlers in their next films. Buddies Aamir Khan and Salman Khan are getting ready to wrestle with their souls and soul brothers in Nitesh Tiwary's Dangal and Ali Abbas Zafar's Sultan, respectively.

But there is a difference. While Aamir has chosen to pile on loads of lard to look like an aging pehelwaan with two grown-up daughters, Salman has decided to make the character look fab without the flab.

The first look of Sultan that's just out shows Salman with close-cropped hair and a moustache, looking defiantly from a titled angle at the camera. This is not the nice guy we saw in Bajrangi Bhaijaan, and we will soon see in Prem Ratan Dhan Payo. This guy is mean and filled with secret angst about his past that threatens to burst open at the seams.