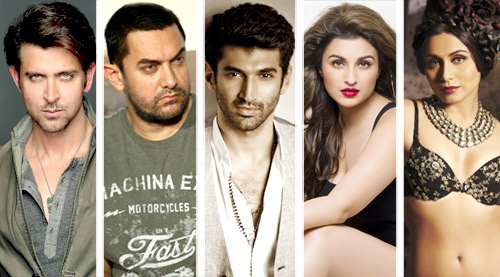 1. Hrithik Roshan: He had one release in 2014, the very mediocre semi-successful Bang Bang and he has Ashutosh Gowraiker's ambitious Mohenjo Daro coming up in 2016. In 2015 Hrithik drew a blank, thanks to his personal problems (a messy end to his marriage) and a bad back. But this superstar will be back, bad back or not in 2016.


2. Aamir Khan: Aamir is no stranger to celluloid abstinence. In 2010 he had no releases. Now in 2015 Aamir fans experienced pangs of withdrawal symptoms. Never mind. He returns in 2016 with Nitish Tiwari's Dangal, and there is much more of him-approximately 30 kilos more-to make up for lost time.


3. Aditya Roy Kapoor: Ashiqui 2's lover-boy had the fiasco Daawat-e-Ishq in 2014 in which he was completely miscast as a Luckhnowi chef. The film's failure provoked a serious sulk in this Kapoor. He took a break in 2015 but will be back next year with Abhishek Kapoor's Fitoor. Hopefully it won't be outside Aditya's comfort zone. He isn't ready to be adventurous yet.


4. Parineeti Chopra: She had the world at her feet with two back-to-back hits in 2013. But the failure of her 2014 output, namely Daawat-e-Ishq and Kill Dill, sent Parineeti scurrying for cover. She took a break, worked on her physique and is back slim svelte ready to strike again.


5. Rani Mukherjee: Though she slackened her pace considerably after marriage Rani did have a major release Mardaani in 2014. In 2015 the actress took a backseat while the producer came to the surface. Rani produced a beautiful baby girl in 2015.The actress will just have to wait.