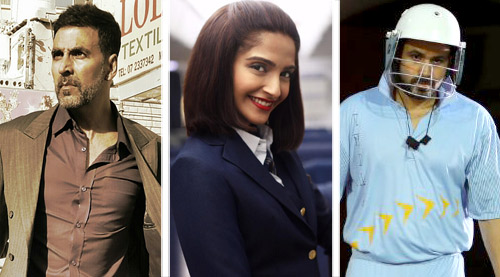 'Truth is stranger than fiction' the adage has come alive in front of us innumerable times when we have seen cases, incidents and circumstances that often leave us surprised or even shocked at times. Bravery, achievements, struggles often make for a good story especially the ones that inspire and motivate audiences. Retelling many such real life tales of people who have fought, achieved and conquered; 2016 will see a varied genre of films that will bring back memories and more importantly teach you an important lesson in life.

Airlift: Based on true events of the Persian Gulf War in 1990, Airlift stars Akshay Kumar as the protagonist. The plot of the film revolves around the real life incident of a mass evacuation of over 1,70,000 Indians by Air India from Kuwait to India. Though this incident wasn't reported or hyped in media due to certain controversial political reasons, this is considered as the largest evacuation by a civil airliner according to the Guinness Book of World Records. A promising trailer coupled with a superstar like Akshay Kumar, the film has a lot of expectations attached to it. The film directed by Raja Menon is slated to release on January 22.

Neerja: Being Sonam Kapoor's first biopic, Neerja traces the journey of Neerja Bhanot focusing on the 1986 hijack of the Pan Am Flight 73. The late model and air hostess is the youngest recipient of the Ashok Chakra award for her bravery. She lost her life whilst saving the lives of three children during this infamous terrorist attack. Her act of selflessness at the tender age of 22 years is what proved to be an essential plot for this film. The film's trailer has already been released and there is enough buzz about the same. The film directed by Ram Madhavni is slated to release on February 19.

Azhar: Unlike stories of some prominent cricketers, Azhar revolves around the controversial life of former captain of the Indian cricket team Mohammad Azharuddin (fondly known as Azhar). From match fixing scandals, to his involvement with actress Sangeeta Bijlani despite being married, Azharuddin's life has been under media scrutiny constantly. The film directed by Tony D'Souza promises to touch upon several personal aspects of this sports personality's life along with inputs provided by the cricketer himself. Starring Emraan Hashmi as the lead, Azhar is slated to release on May 13.

Sarabjit: Though the titular character of Sarabjit is played by Randeep Hooda, the biopic of this Indian national who served over a decade as a Pakistani prisoner will be told from the eyes of Dalbir Kaur, sister of Sarabjit. Dalbir, played by Aishwarya Rai Bachchan, started her struggle to save her brother, after Sarabjit was accused of being an Indian spy. Dalbir, however, claimed that her brother was a poor farmer who had fallen prey to the case of mistaken identity and was later charged for 1990 Pakistan bombings. He was sentenced to death penalty in 1991 but after several delays over the same, Sarabjit was attacked by his jail inmates in 2013 which later lead to his death after a few days. The film will trace the journey of Dalbir as she undertakes this battle and continues it even after his death to give him justice. Directed by Omung Kumar, Sarabjit is already creating curiousity for its casting and is slated to release on May 20.

M.S. Dhoni - The Untold Story: Adapting the life of yet another famous cricket personality for the silver screen, the Neeraj Pandey directorial, M. S Dhoni - The Untold Story is about the life of the current captain of the Indian cricket team, Mahendra Singh Dhoni. Though the cricketer has had a fairly non-controversial life, the said biopic on him will not only focus on his current achievements or India's win under his captainship, it will also deal with Dhoni's struggles, his love life and promises to offer a lot more insights. M. S. Dhoni - The Untold Story stars Sushant Singh Rajput as the leading man and is slated to release on September 2.

Dangal: While there have been several filmmakers and actors eyeing on making a film on wrestlers, it seems that filmmaker Nitesh Tiwari and Aamir Khan made up their mind way before the others could even think of making an official announcement. The two of them will be collaborating for Dangal, a biopic on real life wrestler Mahavir Phogat. The film, that will compile the entire journey of Mahavir spanning through his young days to recent times, will also have debutants playing the role of Phogat's daughters, who too have made it big in the world of wrestling. Aamir Khan, who did not have a single release in 2015, will now directly be back on the silver screen during Christmas 2016, with Dangal that is slated to release on December 23.

Other films that are inspired by real life include the Sonakshi Sinha starrer Haseena - The Queen of Mumbai, based on renowned gangster Dawood Ibrahim's sister Haseena Parker and the Ranbir Kapoor starrer Sanjay Dutt biopic based on the controversial life of this Bollywood star who is currently serving his imprisonment sentence for illegal possession of arms and ammunition related to the 90s riots in Mumbai. Recently filmmaker Amole Gupte also announced a biopic on popular sports personality Saina Nehwal but the film is still in its initial stages and the casting is yet to be finalized. John Abraham too announced a football film titled 1911 based on footballer Shibas Bhaduri of the year along with Shoojit Sircar more than a year ago but it is currently in the backburner owing to the duo's other commitments.